Murder At The Beacon Bakeshop by Darci Hannah 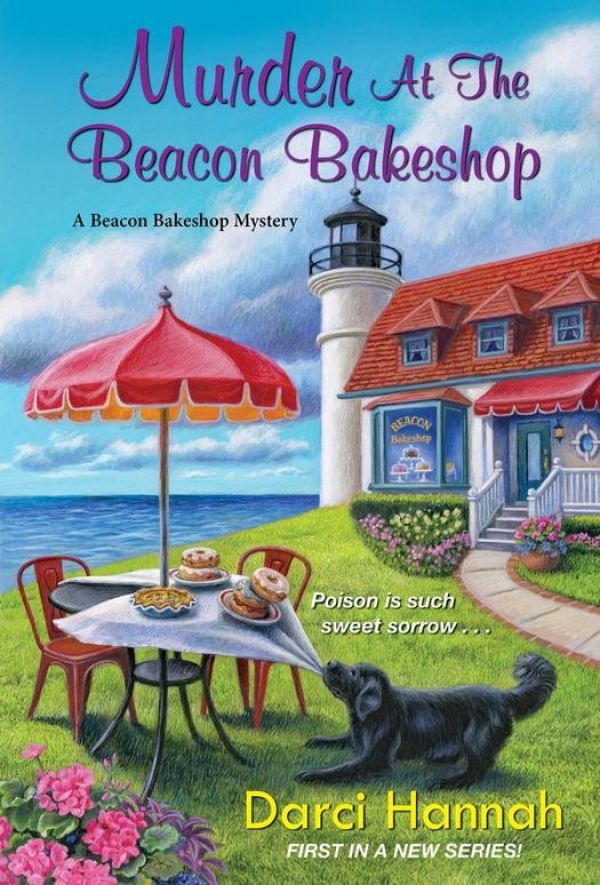 Lindsey Bakewell is a successful investment banker in NYC. But then she finds out that her upscale restaurant owner/fiance is cheatin’ with his spicy pastry chef! What’s a woman to do?

Lindsey did what every red-blooded American woman would do – kick the sleazebag to the curb and go shopping! And that’s how she wound up with an old historic lighthouse on the Shores of Lake Michigan (now that’s what I call a “serious” shopping expedition!).

The chapter opens when Lindsey and her dog, Wellington, are chauffeured to their new lighthouse which will serve as both their home and Lindsey’s new bakery business. But she probably didn’t get the memo that “everything” looks good on the internet – and buying real estate over the internet, sight unseen, was probably NOT the best idea!

Much to her dismay, it’s quite rundown – dingy bricks, gutters falling off and in need of some serious exterior work. After breaking off her engagement with Jeffery, she decided she needed a change of scenery and a fresh start. There were bakers in her family and baking also became her passion and hobby. Now she’s packed it all in to live out her dream and fulfill her destiny. At least that “was” the plan until she saw her new investment!

With heavy sighs, she pulls herself together and decides to stand up to the challenge. Time to fix up this once grand historic landmark and bring it back to life – and bring on the baked goods!

After a few months, the hardworking construction crew is finished. The staff is hired and trained, and Lindsey is ready for her grand Memorial Day opening – or so she thought!

Soon the opening day is here – and it’s going great! There’s lots of publicity thanks to her influencer NY bestie, Kennedy, and all of the townsfolk have shown up to enjoy her fresh baked goods and savor the freshly brewed coffees. But then local snowbird, Fiona Dickel shows up with a bunch of irate protesters – seems they don’t feel the lighthouse should have been sold to a private individual. They’re angry, they’re yelling — they’re getting in people’s faces!

Then a bus pulls up with a bunch of New Yorkers! It’s her slimy ex-fiance and Mia, his raging pastry chef lover, and, uh 0h – move over Arnold, they brought their own gang of bakery terminators!

Next thing you know both groups are causing a riot – people are shoving each other, donuts are flying, lattes are spilling, people are yelling to “shut her down,” and food fights are erupting. Lindsey’s newly renovated bakery is in shambles!

Then someone started choking and keels over. Just like that, Lindsey’s grand “opening” becomes a grand “closing” – as her beloved bakery becomes the scene of a homicide investigation!

I loved everything about this new series. The characters are as solid, realistic and all fabulously interesting! Added bonus: the lighthouse just might be haunted!

Armchair sleuths will have a suspect pool filled with plenty of swimmers! Someone is a killer. Is it one of the steadfast staff? The hunky, woodsy neighbor? Could it even be the real estate agent or one of her relatives? And how about a whole busload of New Yorkers or one of the radical protesters? And what about Lindsey’s ex?

Lindsey is scrutinizing each and every one of them – not because she really wants to, but because she has to. You see, she eventually becomes a murder suspect herself! And hey, there’s just no way you can run a successful bakery from the “big house!”

Don’t let this new series get by you – it’s a MUST READ! It has more twists than Chubby Checker and is sure to please any avid cozy reader out there! And if you want a happy ending, this book rocks it! Sometimes you just want to find out who the killer is and move on. But in this case, Ms. Hannah’s characters are like the Energizer Bunny, they keep going and going even after the murder is solved – and IT WORKS! In these challenging times, it’s great to have a long, happy ending!

A copy of this book was provided by the publisher, Kensington Publishing, a paid sponsor of Wonder Women Sixty.