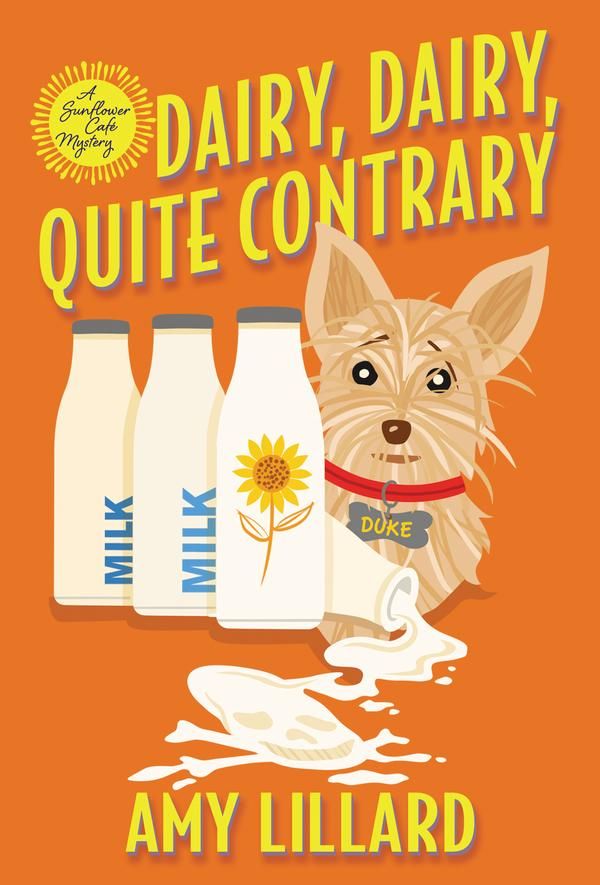 Twenty-nine year old Sissy Yoder has packed up her bags and Duke (her Yorkshire terrier) –she’s not gettin’ outta Dodge – she’s gettin’ out of Tulsa, Oklahoma. Seems like things just weren’t working out in Tulsa, especially when it came to her cowboy boyfriend.

Now she’s taking up temporary residence in Yoder, Kansas where there are not only plenty of “Yoders” but plenty of family members. Her Aunt Bethel runs the local Sunflower Cafe. It’s a Good Luck/Bad Luck situation. Bad luck for Aunt Bethel – not only did she break her leg, but her daughter, Lizzie, who helps her run the cafe, is home on extended pregnancy bed-rest.

Good luck for Sissy, who manages to convince her aunt to let her fill in temporarily for Lizzie at the cafe. She figures this will give her enough time to clear her head, take a break and figure out where and what she wants to do with the rest of her life.

Things seemed to be falling into place. Sissy not only has a paying job at the cafe, but has managed to keep working remotely as fuddy-duddy advice columnist, Aunt Bess. She’s also scored a small apartment that’s comfortable enough for both Duke and herself.

This endearing cozy gives us a colorful kaleidoscope of the town of Yoder. It’s a a mix of Amish and English, with a strong presence of Yoder families – both young and old. In this small town, not only does everyone know everybody, but many of them are related!

Want some down-to-earth and believable cozy characters? Amy Lillard provides them: Aunt Bethel is tough as nails and runs a tight ship. Josie, a waitress at the cafe, has a chip on her shoulder and seems to be a bit on the shady side, while the rest of the staff seems pretty laid back. Gavin Wainwright is a reporter for the local underground paper – he’s nerdy, but interesting and single. Jonathan runs the Brubacher Dairy and supplies the town with fresh dairy products and Evan Yoder isn’t the most personable guy in Yoder, but he runs the family horse farm. It’s a close knit and friendly town where townsfolk band together to celebrate community events.

But here’s the problem: She’s only been helping out at the cafe for a short time when she finds Kevin, the milkman dead, i.e., murdered at the cafe’s backdoor! To boot, the local Deputy Sheriff seems to have a personal grudge against Sissy and has made her the number one suspect in the milkman’s death. So much for clearing her head and having some breathing room!

The Deputy Sheriff is constantly shadowing her in an effort to pin a murder rap on her! This leaves her no choice but to start some snooping around on her own. When she does, she finds herself partnering up with Gavin, the local newspaper guy.

They both know the first thing they need to do is to figure out the motive and then line up the suspects. Unfortunately, there’s aren’t any clear motives, so there’s no clear suspects.

There’s talk about Kevin being involved in gambling. And also a rumor that Kevin was delivering more than milk – seems he’s been stepping out on his wife (and 10 kids)! Could the motive be jealously? Lost love? Insurance money? Mob debts? And what’s up with the “fake” insurance adjuster?

Like a warm glass of milk, Dairy Dairy Quite Contrary is a smooth and comforting treat. Don’t miss this FIRST in a brand new series by Amy Lillard and Kensington Publishing. On sale in July (just around the corner).