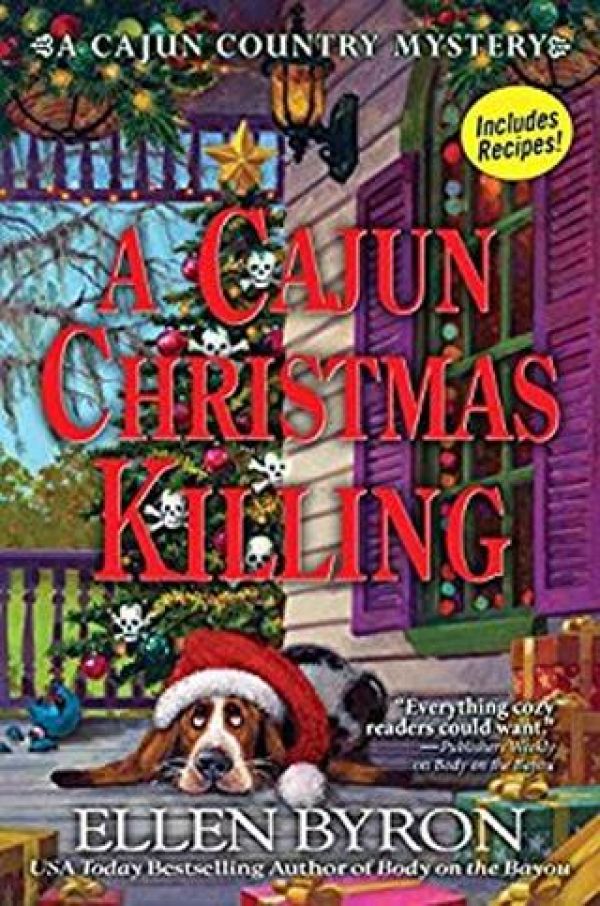 Whether you know her as Ellen Byron and her Cajun Country Mysteries or as Maria DiRico and her Catering Hall Mysteries, it just “doesn’t matter” – IT’S ALL GOOD!

A Cajun Christmas Killing by Ellen Byron is one of my favorite holiday mysteries.  As usual, Ms. Byron gives us a Cajun tale that’s hard to put down.  It’s a book of plenty:  Plenty of suspects.  Plenty of twists and turns.  Plenty of good-hearted southern folk.  Plenty of louses!  All this equates to armchair detectives having a field day breaking down and deciphering all of Ms. Byron’s detailed characters in order to expose the killer.

Maybe you aren’t able to travel this Christmas, but this tale is sure to take you on a trip down south to Pelican, Louisiana to visit Cajun Country and Maggie (Magnolia) Crozat and her endearing family. The setting is so realistically detailed you can almost feel the old-world wrought iron plantation balconies and smell the traditional Louisiana cookin’.   Heck, when you finish the story, you’ll probably be trying to book at stay at The Crozat Plantation Bed and Breakfast!

Maggie is a New York City transplant.  While the city certainly had its perks, she finds herself back home.  She has a part-time gig working with tour groups at the Doucet Plantation down the road.  This brings in some extra income while allowing her to concentrate on honing her “artist” skills.  Being back in Pelican also gives Maggie an opportunity to help out at the Crozat family owned Bed and Breakfast. And her family really needs her help right now.  Seems someone is posting scathing reviews for their bed and breakfast on well-known travel sites.  It’s crushing the family’s sales, not to mention their morale.

So Maggie’s doing some sleuthing on her own to figure out who is causing all the toxic damage to their bed and breakfast and the family’s good name.  Is it a competitor?  A disgruntled employee? An unhappy guest – or is it something even more sinister than she can’t even fathom?

On top of it, she can tell her father, Tug, has another “worry” on his mind and it’s driving Maggie crazy.  When she finally drags out Tug’s secret, it leaves her in shambles.  Their beloved bed and breakfast, their ancestral home, their hopes and dreams, as well as their livelihood, are all in jeopardy.  They could lose it all, thanks to a behind-the-scene deal involving Tug’s brother, Tig, and a wily businessman.

As if things aren’t trying enough, while working at her job, a tourist points out a pasty looking dummy draped over one of the Doucet’s plantation chairs.  Maggie quickly shuttles everyone out the room when she realizes that the dummy was made of flesh and blood.  Uh oh — Santa has one more name to cross off his list!

Maggie’s Bo IS her “beau” and he’s also on the local police force.  Police Chief Rufus Durand is also Bo’s cousin and boss – and hasn’t always been a fan of The Crozats.  But when the investigation begins, Bo is linked to the dead dude and suddenly he’s added to the suspect pool – and that’s some mighty cold water he’s swimming in!

Maggie’s sleuthing skills have gone into overdrive.  She has to protect the reputation of her family’s B and B and get Bo off the suspect list for a murder rap.  She’s even teaming up with her Gran who’s doing some pretty smooth sleuthing herself!

For those of you who love a lot of suspects, there’s enough of them in this book to fill a Mardi Gras parade! You’ve got tour guides, exes, a fitness instructor, suspicious guests, a gaggle of greedy relatives and more —  even Maggie’s old boyfriend from NY makes a guest appearance!   I loved trying to figure out which suspects were truly the bad guys, the good guys, and the “fakes.”   Lots of facades, trickery and underhandedness — all make for another delightful cozy mystery from Ellen Byron.

Thanks Ellen for a fabulous Christmas Cozy – you really ROCKED IT!

Want more Ellen Byron/Maria DiRico book reviews?  Then check them out under the BOOKS/Mystery category.

A complimentary copy of this book was provided by the publisher.  For sponsorship info contact:  ann@wonderwomensixty.com.