Beyond A Reasonable Donut – Ginger Bolton 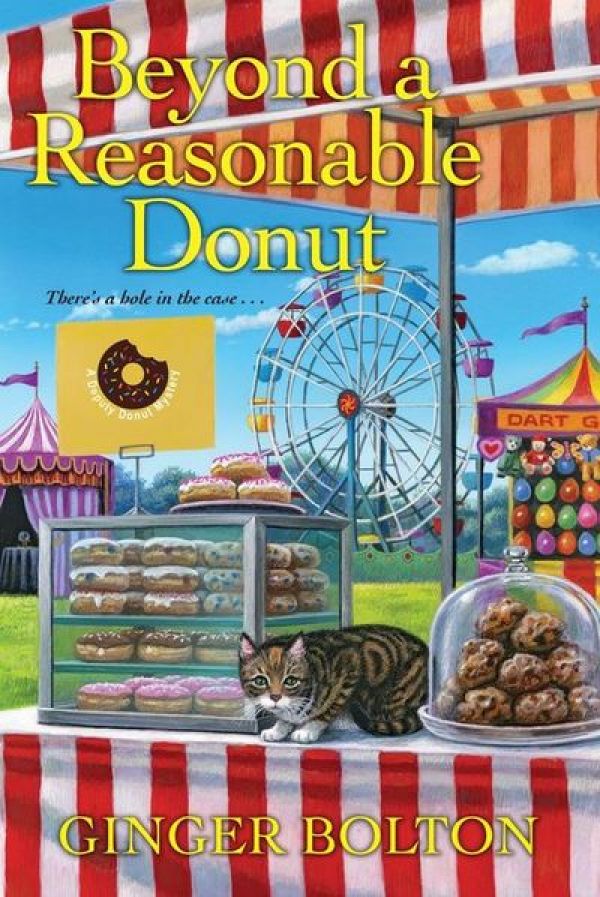 Nothing says “summer” more than the loud, happy voices of folks both young and old as they stroll through the fairgrounds and carnivals. Children excitedly tug on their parent’s arm and point to fun rides while musicians, clowns and other entertainers leisurely work the crowds to ensure everyone has a full day of fun.

I can’t think of a better summer cozy that provides us with a perfect combo of summer fun and mystery than Beyond a Reasonable Donut. It’s August in Fallingbrook, Wisconsin. Emily Westhill is the owner of the Deputy Donut shop. Her right-hand gal is Nina, who is a struggling artist trying to get her own art show, but in the meantime, is working at the donut shop to help pay the bills.

This year Emily decides her donut shop is going to participate in the local Faker’s Dozen Carnival. The story opens when Emily and Nina arrive at the carnival to set up their food tent including delectable fritters and donuts. They are off to a bit of a late start, and things just go downhill from there.

Thankfully Emily isn’t wearing ruby red slippers, because Marsha, the event coordinator, is about as helpful as the Wicked Witch of the West. Then there’s a run-in with a creepy mime. And things just keep getting weirder. Later they discover a large container of powdered sugar has been stolen from their car – forcing them to “improvise” on some of the fritters. As the day progresses, a magician suddenly appears at their tent with a slight-of-hand-trick that no one saw coming!

They somehow manage to make it through the day in spite of the strange events and people buying up their goodies as fast as they can make them. Colorful out-of-towners also invade their tent, praising their newly found sugar rushes. By the end of the day, Emily and Nina are both glad the carnival has come to a close and are more than ready to go home and relax. Not happening! Someone broke into Nina’s apartment, destroying her artwork – and there’s a dead body lying crumpled on her floor!

Things go from weird to worse as the local police start fast-tracking Nina up the suspect list. Emily knows there’s no way Nina committed such a twisted crime, especially in her own apartment – unfortunately the police don’t – and place her under arrest!

That just won’t do – both Emily and Nina are supposed to be in an upcoming wedding – just days away. It’s up to Emily to use her own sleuthing skills and her friendships with some of the police officers to help get Nina out of the big house. Not even a Deputy Donut would be sweeter than nailing the real killer!

Beyond a Reasonable Donut is a light and airy, fun summer cozy. I could almost smell the corn dogs, fried Oreos, cotton candy and other carnival food wafting through the air. The Deputy Donut shop is depicted so realistically that it will have you searching for it online! When that fails, you’ll be seeking out your own local donut shop! The old Ford Deputy Donut car is decked out as a fake cruiser with a huge plastic donut (complete with sprinkles) on the roof. It made me instantly SMILE!

There are plenty of suspects to choose from and Ms. Bolton gives us some nice sinister twists to go along with those sugary sweet donuts! Don’t miss this newest release, #5 in the Deputy Donut series, released in June.