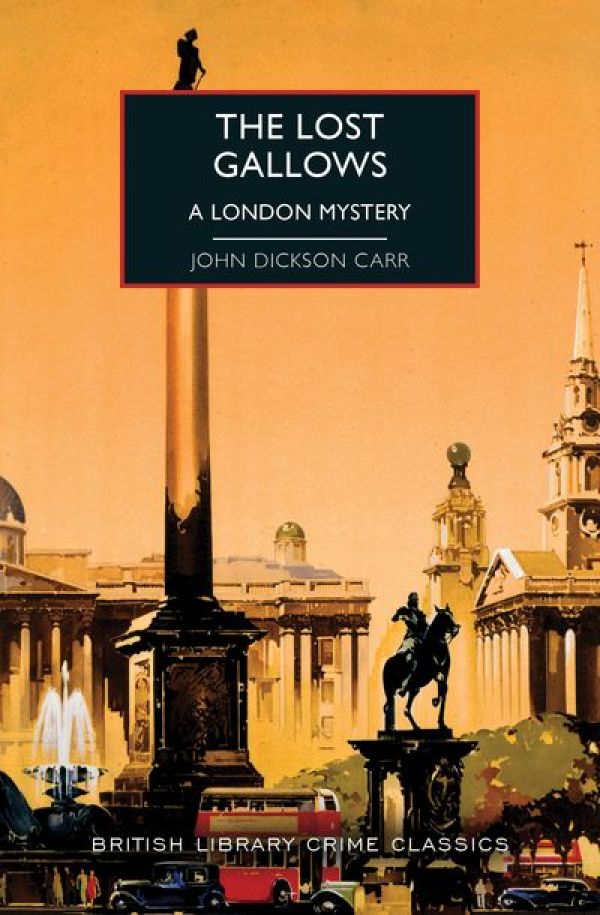 Not only is The Lost Gallows another lost gem from the early 1930’s – but this one is going down as one of my favorite mysteries of all time. Anyone who enjoys the old Sherlock Holmes movies or books will be in 7th heaven with this solid, whodunit tale with a quiet twist.

The Lost Gallows is John Dickson Carr’s second novel and features Parisian Detective Henri Bencolin. This heavily veiled mystery takes place in London, and the stage is immediately set on the very first page. Detective Bencolin and his friend, Jeff Marle, are at a very private men’s club: The Brimstone. They are conversing with Sir John Landervorne who resides at the Brimstone and is one of Bencolin’s oldest friends.

Together they are surveying a tiny 8” model of a gibbet (gallows) eerily left on a chair in the club lounge. It doesn’t take more than a few pages to draw you into the quiet, almost morbid atmosphere of the Brimstone Club. Founded in 1798, through the years it housed gaming and “full-blooded devilment.” Now it’s a rather forlorn and most curious institution – and as Carr so aptly described it: “…the smell of top-hats and hell fire lingers strong.”

It’s a deeply brooding and haunting setting. Seven people are currently residing at the Brimstone plus the staff and servants. The club is filled with great rooms of 25 foot ceilings and carvings of gargoyles, snakes, owls, austere portraits and twisted columns with weird sculpted heads.

Long ago, a woman jumped to her death from a top floor window and a young Lord also committed suicide. Tales abound of hidden rooms where the owner cavorted with savory women. For the past 30 years the club has welcomed wealthy wanderers and the drifting scum of the world – anyone willing to pay an exorbitant membership fee.

But as Bencolin and his friends discuss the meaning of the tiny gallows, little do they know that it is tied to death in the past, present and future. The killer is taunting them – with promises of murderous vengeance on Ruination Street. But everyone involved is perplexed – not just by the fact that there is no Ruination Street in London, but by a corpse driving a car!

Bencolin uses his wits and superior methods of deduction to solve this deep-rooted, jaw dropping mystery. With the help of his friends and Scotland Yard, Bencolin becomes the cagey cat in search of a sly and elusive mouse.

Don’t miss this mesmerizing mystery. The moment you delve into this book you are immediately lured into the heavy London fog and then clenched in the unyielding grip of Brimstone itself…and you aren’t going to be set free until the very end. Even then, a bit of the ghostly fog will still linger!

Once again, hats off to Poisoned Pen Press and the British Library for making lost gems, like this one, available to us NOW!

Check out the books/mystery category on this site for more mystery reviews – including cozy mysteries and other British Library Crime Classics. Cozy lovers, be sure to also check out the books/Kensington Mysteries category.