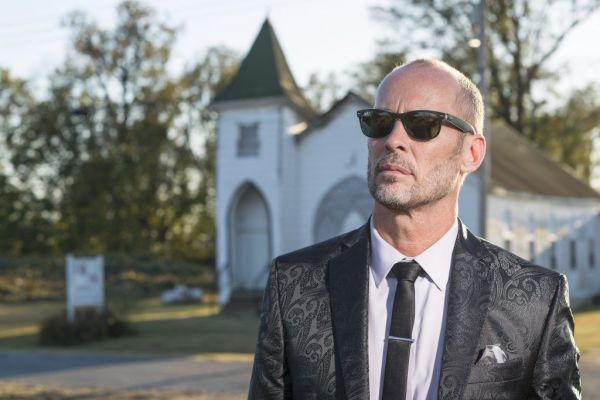 The morning after the Paul Thorn concert in Alexandria, VA, I woke up fully charged!  Thorn’s rocked- out, upbeat “Everything’s Gonna Be Alright” was still stuck in my head. I woke up on overdrive, no caffeine needed!  It was a great way to start my morning – THANKS PAUL!

Some of my friends asked me to describe Paul Thorn’s music. I had to pause for a moment before I could answer: he’s blues, rock, southern fried, gospel and country – and he does a mean acoustic!   This guy is phenomenal – he can do it all!

Hailing from Tupelo, Mississippi, his hard rockin’ bluesy songs opened the concert. His personal stories are fascinating.  As he tells it, he was the son of a preacher and his uncle was a pimp – talk about being schooled in BOTH worlds!  This inspired the title for one of his albums, Pimps and Preachers.  Loaded with talent at a young age, his unique (if not downright bizarre) upbringing enables Thorn to wail and rock through songs that reflect life’s lessons —  being caught between the good guy (God) and the bad guy (the devil).

You know when he belts it out, he’s not faking it – he is the REAL deal and knows how to sing it!  Pick up or download any of his albums and you’ll see each one is jam packed with tales of life’s struggles, heartaches, victories and uplifting positive vibes.

His stories are riveting, his music is flawless – his talent, just incredibly enormous.  In the middle of the set after some hard southern fried rock, he tells the audience that when he was growing up, he loved the Jackson 5 and was going to break out with one of their songs!  I just looked at my friend and went “huh???”  But being the musical master that he is, he took “I Want You Back” to a whole different level – as only Paul Thorn and his superbly, dynamic band could!

Like a Maserati Gran Turismo, he can go from 0 to 62 mph in 4.9 seconds — then hit the brakes and slow it down to reflective, sometimes sad songs.  His song titles taste of his musical diversity – songs like: What The Hell is Going On, Everything’s Gonna Be Alright, Old Stray Dogs & Jesus, Nothing But the Devil, Better Days, I Don’t Like Half the Folks I Love, Get You A Healin’, and I Backslide on Friday.

He’s collaborated with some of the best:  Sting, Tanya Tucker, Ronnie Milsap, Carole King and many others. But all this music he’s been churning out for over 20 years isn’t enough – Thorn now blows us away again with his first rocked out Gospel album:  Don’t Let the Devil Ride.

The bottom line:  If your musical tastes lend themselves to a dynamo-helluva rockin’ singer backed by a bluesy band with country overtones and kick-ass southern swagger, pick up any of Paul Thorn’s music – you won’t be disappointed.  If you want to put a gospel revival in your living room or car for that holy spirit snap –then grab his newest release:  Don’t Let the Devil Ride.

THANKS PAUL – LIKE THAT MASERATI, YOU GAVE US A GREAT RIDE AT THE BIRCHMERE!