Playing the Devil by R.J. Lee 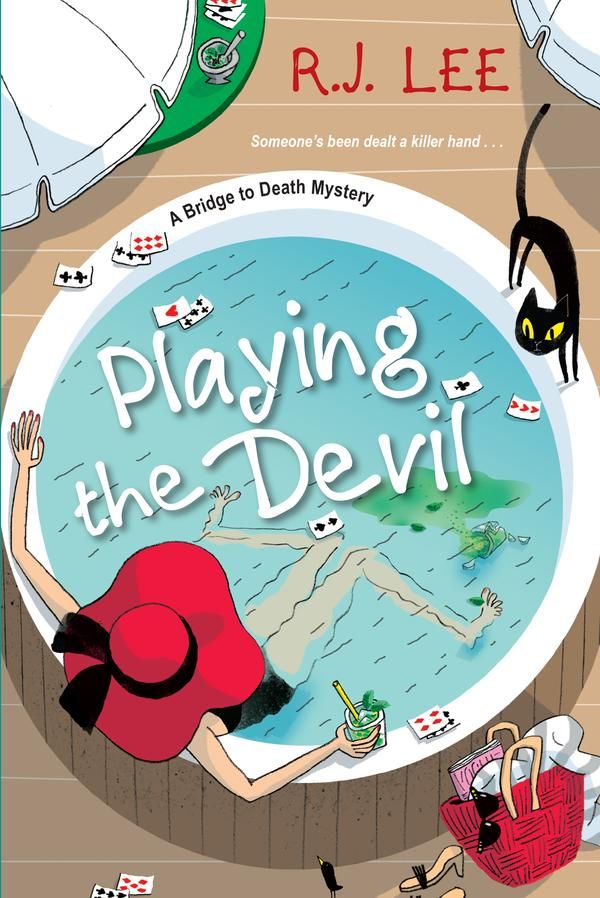 There’s nothing worse than a middle age man who can’t seem to let go of his high school or college days – those days when he was a football hero, scoring a major touchdown at the very last second to win a prestigious game. And in Playing the Devil, the guy’s name is Brent Ogle.

In fact, our mystery centers around Brent Ogle — one of the most obnoxious and arrogant characters I’ve ever met in a cozy mystery. He’s downright mean, a bully, a snob, a chauvinist and more! In his football days, he was known as ”The Baddest Devil of Them All” – a title he’s still proud of! And he’s still rubbing the glory days of his youth in everyone’s face – along with his money!

But that’s where the trouble begins – at the clubhouse. There’s a power outage – a woman screams – Wendy goes to investigate. Nothing can ruin a good game of bridge faster than finding a dead body in the club’s hot tub! And nothing shouts “murder” louder than an unholy gash on the head of the deceased.

Not only do Wendy’s investigative skills kick in, but she’s also the daughter of the local police chief and, apparently, “sleuthing” is just in her genes. She knows this is a great story for the newspaper, and she also knows everyone who was in the clubhouse at the time of the murder. She’s betting one of them is the killer.

But as she starts probing into the suspects’ backgrounds, she has a hard time believing any of them could be a killer. Usually the spouse is the first to be suspected, especially one stuck in an extremely unhappy, loveless marriage. But there was that awful fight between golfers – hmmm – maybe the golfers, including a female golf pro, should go to the top of her suspect list. But wait — the director of the clubhouse and her son also have motives – as does the club’s bartender….and the list keeps growing!

Wendy, her police chief dad and her policeman boyfriend are all working together to flush out the killer. But Wendy is taking the lead as a prime-time reporter and digging up the dirt on all the suspects – she’s bound and determined to solve the case and land herself a first-rate news story.

R.J. Lee gives us a second installment in this devilish good Bridge to Death Mystery series. Playing the Devil has all the twists and turns to keep cozy fans squirming. The characters and charm of Rosalie are a true delight – a guarantee you’ll want this series to keep on going!

If you haven’t read the first in the series, The Grand Slam Murders, then grab yourself a copy – I “was” and “am” hooked on this relatively new series by R.J. Lee. And great news, the third installment, Cold Reading Murder is also available. I haven’t had a chance to read #3, but if it’s anything like #1 and #2, it’s got to be a winner!

A copy of this book/photo was provided by Kensington Publishing, a paid sponsor of Wonder Women Sixty.