Murder In An Irish Cottage by Carlene O’Connor 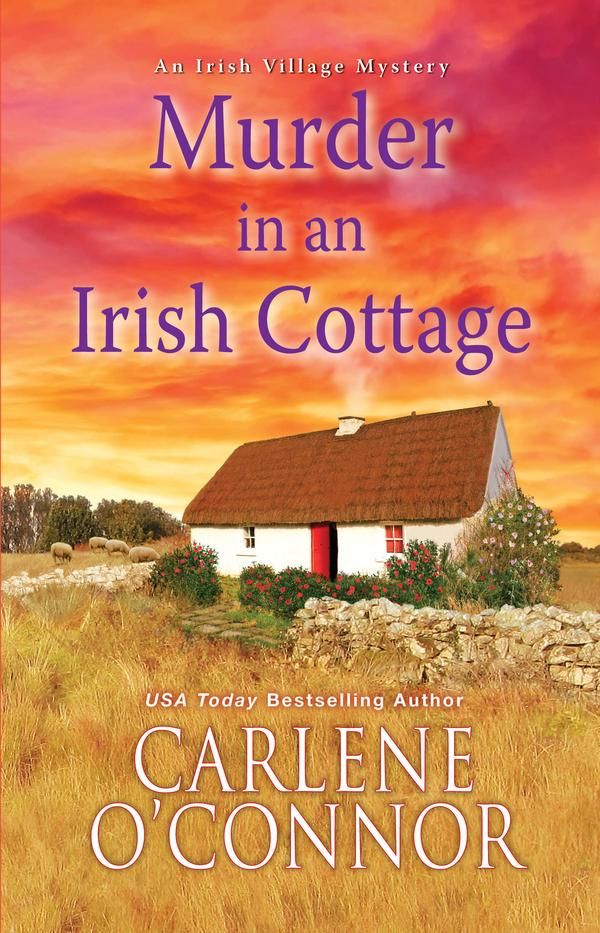 With St. Patrick’s day on the horizon, now is the perfect time for cozy fans to get themselves “a wee bit of Ireland” – and nobody does it better when it comes to cozy Irish mysteries than Carlene O’Connor and her stellar Irish Village Mysteries.

Ellen Delaney and her daughter, Jane, have recently moved to Ballysiogdun. They’ve taken up residence in a stone cottage in the beautiful scenic countryside. Unfortunately, their cottage was built smack in the middle of a fairy path. You might say: so what, who cares – fairies? Pshaw! That was my reaction when I started reading this impossible to put down cozy.

I used to think that fairies were boring, even though they were cute and playful as they fluttered about with glittered wings. Well, apparently that’s “our” image here in the U.S. Fairies in Ireland are seriously different: Irish fairies are tricksters, not so nice, fiendishly clever and downright deadly when their turf is invaded.

Yes, fairies are purely old wives tales/folklore (well, probably). But the residents of Ballysiogdun would most adamantly disagree. They are certain that Ellen’s cottage is cursed because of the fairy path, fairy ring and fairy activity going on around her home. Apparently, “we” cannot live among the fairies…tis truly asking for trouble. So the townsfolk and Ellen’s neighbors want the cottage (her quaint and peaceful home) – bulldozed to the ground!

Ellen pays no attention to them, even though in the last 2 decades, 5 previous cottage residents died under suspicious circumstances. But then a weird reality hits home – a body is discovered inside the cottage.

Our heroine in this series is Garda (police) Siobhán O’Sullivan. She’s just gone on holiday break. But before she can even decide how to spend her time off, her fiance, Macdara Flannery has called her with some distressing news – apparently one of his relatives has met an untimely death. So off they go to Ballysiogdun, to find out what has happened.

Macdara is also with the Garda and he’s a fine detective. And even though they are out of their jurisdiction, they can’t help but get involved in the case since Macdara’s relative was flat out murdered. As they start to poke around with their own private investigation, they manage to ruffle the feathers of local Garda. The residents aren’t thrilled to have them snooping around either. They are keeping watchful eyes on them, persistently blaming the whole sinister affair on the fairies being teed off because the cottage is in their path.

But Siobhán and Macdara know better. Then another murder victim turns up and they have their hands full weeding out fact from fairy fiction. This is a mesmerizing mystery with interesting Irish folklore and a delicious devious plot. There’s a missing painting, a gold coin, a mysterious limo, strange pulsating lights at night accompanied by dancing fairies, a wail of a banshee and more! Plus there’s a whole merry-go-round of townsfolk and neighbors that fit the “suspect” bill.

You’ll enjoy tying all the pieces together as you to try to ferret out the “real” motive and, of course, the “real” killer! And whether or not Carlene O’Connor has convinced you that fairies really do exist – well, that’s all on you!

So grab a copy of Murder In An Irish Cottage and take an armchair trip to Ireland! GOOD NEWS: Carlene O’Connor recently released another book from this series, Murder In An Irish Bookshop. Check it out on this site under the category: Books: Mystery/Kensington. Why not grab them BOTH and DOUBLE your St. Patrick’s Day cozy fun!

A copy of this book/photo was provided by Kensington Publishing, a paid sponsor of Wonder Women Sixty.