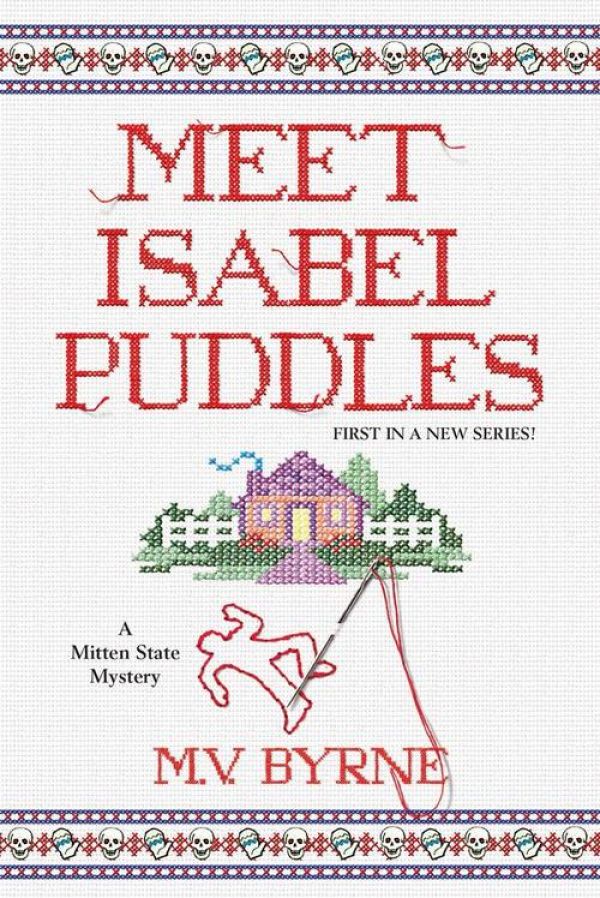 Former hairdresser, Isabel (Izzy) Puddles, is a character so instantaneously lovable that she is bound to become one of your favorite cozy “sleuths!” The characters are quirky and infectious, and the setting on the shores of Lake Michigan provide readers with a top-notch cozy.

It’s a sad day when 88 yr. old, well respected local farmer Earl Jonasson, Sr., passes away of natural causes. It’s even sadder for Izzy who knew him quite well and is now “fixing his hair and make-up” for the soon-to-be viewing. Yup – even she thinks she’s got more than a couple screws loose for accepting this unpleasant and somber gig to earn some extra dough.

But as she’s fixing his hair, she makes a highly suspicious discovery – and she’s stunned into the realization that Earl Sr.’s natural death might not be all that natural!

She speed-dials her cousin Ginny who works at the local police station and is engaged to Grady, the County Sheriff. It doesn’t take long to determine that Earl Sr. was, indeed, murdered. And it doesn’t take Grady long to arrest Earl Sr.’s son, Junior, for the crime.

Izzy has known Earl Jr. all her life and can’t believe he’s capable of first degree murder. But the motive is there – a flush inheritance. Then the murder weapon is conveniently found on his property – Earl Jr. is in a whole lotta trouble!

As she starts sniffing around, she discovers a virtual cesspool of lowlifes, namely the Trudlows. Seems like love truly is blind – at least for Earl, Jr. Tammy Trudlow had the poor guy wrapped around her little finger because she knew a “good thing/easy ride” when she saw it! Could Tammy somehow have fast-tracked Earl Sr.’s demise thinking she’d marry his son and get her grubby paws on the inheritance?

Or maybe the murder has something to do with the wind turbine project that, coincidentally, has blown (pun intended) into town. Seems the Wind-X Company has their eyes on several properties, ready to gobble them up with a quick cash payout. And what’s up with that dilapidated old farmhouse on the outskirts of town – lights should not be “on” in a decaying house on a vacated property.

As Izzy gets down to some serious sleuthing, she gets tangled up (literally) with Julie Welker, Earl Jr’s fiesty big-shot city lawyer and his sister, Meg. These 3 “tough cookies” get themselves in a murderous mess of trouble – but which of them would survive – even I wasn’t sure!

In most cozy endings, the author unmasks the killer and provides us with a fairly short satisfying and gratifying ending. Long extended happy endings don’t always work in cozies (people get bored). But it works for some authors whose characters and writing style can pull off a long-haul ending — M.V. Byrne is definitely one of them!

Don’t miss Meet Isabel Puddles, an action-packed amusement park cozy ride! As soon as I finished Meet Isabelle Puddles, I immediately ordered the second in the series, Isabel Puddles Investigates..and pssst…I hear there’s a 3rd one in this series in the works!