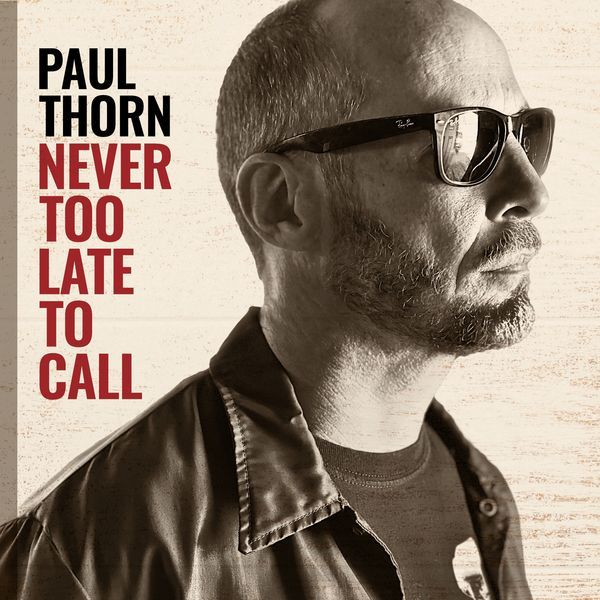 Mississippi-native songwriter, singer, and guitar player, Paul Thorn just released his newest album: Never Too Late To Call. And Thorn has never sounded better. At 57 years old, Paul Thorn is at the TOP OF HIS GAME! He’s the son of a preacher and nephew of a once-pimp, a former professional boxer with a winning record, and even an accomplished painter…he’s one well-rounded guy!

I’ve seen Thorn live over the years and have been bummed out by the fact that it’s hard to even get to any live concert venues at the moment. But Thorn’s stellar new release is the next best thing! What makes Paul Thorn so different from other musicians is that he doesn’t just sing and write the songs – he’s lived (and living) the songs. And that’s one of the reasons his music resonates with so many folks.

When you listen to Paul Thorn there is no doubt in your mind that this guy is the real deal. You can hear the anguish and pain coming deep from the chambers of his heart when he sings about love’s addiction (Apple Pie Moonshine), and love gone wrong (Goodbye Is The Last Word), or love that you can’t get quite right (Breaking Up For Good Again).

In his song Two Tears of Joy, he let’s us know that he’s been through a lot in his lifetime, needing forgiveness and mercy from friends and family. But in spite of it all, he admits he’s come through the fire a better man – he’s forever grateful and we believe him.

The track It’s Never Too Late To Call, is a somber song about when the world is weighing heavily on our shoulders, there’s a friend in the wings waiting to help. The slow-burn chorus says it all: “When you’re wearing concrete shoes at the bottom of the lake – and it feels like your heart can’t take another break, just remember it’s never too late to call.”

You Mess Around and Get a Buzz is about the perils and addiction of substance abuse, while Sapalo talks about life after a short stint in the slammer and getting the band back together: “We’re looking good, we’re feeling good, we’re living good, it’s all good.”

My favorite song is Here We Go. It’s starts off with runway beats that flow into a subtle verse about the broken promised land, then launches into a high-flying energetic chorus: I feel good about what the future holds, take my hand and here we go…. Happy, reflective and positive – totally infectious, finger snapping and danceable – it’s sure to cheer you up if you’ve got a case of the blues.

There’s 11 tracks on Never Too Late Too Call, and there isn’t one bad song on the whole album. It’s a flawless variety of songs that only a master storyteller like Thorn can pull off. He’s been around the block and he’s sharing life’s ups and downs, many times advising us or warning us along the way. His raw, sometimes raspy voice is still immaculately pristine. He’s blues, he’s rock, he’s shades of country – with a pure Southern style that’s all his own.

Paul Thorn’s stories and songs appeal to folks of all ages, because they are about “life.” And as most of us have learned from experience, life can certainly have its ups and downs. Just like life, Thorn’s stories are gutsy and gritty. But they can also be filled with thankfulness, hope, love and redemption.

Check out: Never Too Late To Call. If you enjoy this new Paul Thorn album, be sure to check out his previous albums – all good stuff!

Musicians, authors and publishers can contact me at:  ann@wonderwomensixty.com