Kill Them With Canvas by Bailee Abbott 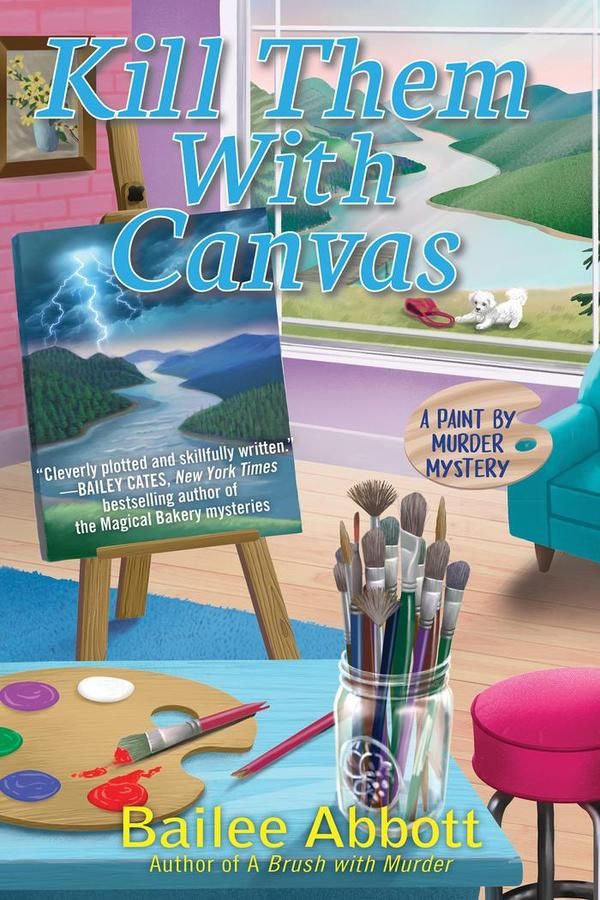 I can’t think of a better new release to get us into the Halloween cozy mystery spirit than Bailee Abbott’s Kill Them With Canvas. This is the 2nd in her Paint by Murder Mystery series, and just like her first entry, A Brush With Murder, it’s simply delightful!

Chloe Abbington and her sister, Izzie, recently started a very unique business – painting party events in the quiet western New York lakeside town of Whisper Cover. It’s Halloween season and the sisters are hosting their first Halloween painting party with a lakeside view, lined up by their endearing Aunt Constance. The event is a huge success and sure to bring in more future business.

But the next morning, a body is found floating in the fabled haunted lake. It’s no ghost that killed the victim – it’s a real flesh and blood killer! The town is stunned. But no one is more shocked and rocked than Chloe and Izzie – their Aunt Constance is looking like a prime-time suspect!

Apparently their aunt had a serious falling out with the victim. As evidence against Aunt Constance begins to stack up faster than a Lego contest, Chloe and Izzie put on their sleuthing caps to see if they can flush out the real killer.

But they soon find out, there’s other suspects to hone in on, even without a clear cut motive. Dewey, the local ferry boat operator who found the body, is acting suspicious – then he suddenly disappears. A nasty, power hungry Sarah Gilley had an intense dislike for the deceased. Then Spencer, Aunt Constance’s daughter, blows into town and she’s got a lot of secrets she’s hiding – could she possibly be involved in this murderous mess? Or maybe it was someone else that hasn’t yet shown up on their radar screen?

This is one of my favorite new series from Crooked Lane Publishing. Bailee Abbott consistently gives us plausible and solid characters. She gives us a quiet murder happening during the Halloween season, and peppers it with a subtle ghost story, a creepy disappearing canvas, a solid twisty plot and characters totally endearing and viable. Pet lovers will adore Chloe’s dog, Max. Romantics will appreciate Chloe’s ex-boyfriend lawyer showing to help (and win her back) versus a future hookup with Hunter, a handsome local cop.

Bailee also introduces two new characters, Rex and Brody. I’m hoping they’ll both be appearing in future Paint By Murder mysteries. If you’re looking for an entertaining, flawless and well-crafted cozy, then check out Kill Them With Canvas.

Kill Them With Canvas is on Wonder Women Sixty’s TOP HALLOWEEN cozy reading list coming out in the next week, so be sure to check back soon. Want more cozy mystery and thriller reviews? Then go to our BOOKS/MYSTERY category, including a review of Bailee’s first in this series, A Brush With Murder.

A copy of this book and photo was provided by the publisher.