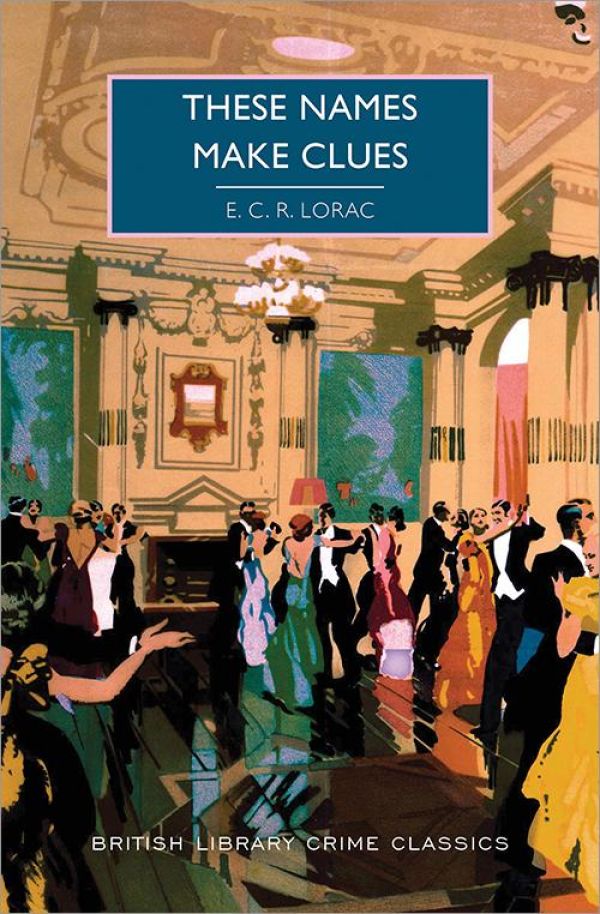 I’m positively hooked on Poisoned Pen’s releases of the British Library Crime Classics. These Names Make Clues is another superb mystery published in 1937 by E.C.R. Lorac, a pen name for Edith Caroline Rivett (1894-1958), who also wrote as Carol Carnac.

This book captures the mood of the Golden Age of Murder between the two world wars. The story opens with Chief Inspector MacDonald debating the acceptance of an invite to a treasure hunt. The treasure hunt is being hosted by thriller publisher, Graham Coombe, and his sister at their estate.

The guests have never met before. Ten guests will be participating using only literary and historical names assigned by the hosts. It’s an assorted lot – a prominent economist, an historian, authors, scholars and one police chief (should MacDonald decide to go). Everyone gets a clue to unravel during an evening guaranteed to be a competitive battle of wits. At the conclusion of the hunt, guests try to figure out the real names of all the guests.

The Chief Inspector can’t decide if he should go – so he literally flips a coin – he’s going! But in the middle of an entertaining evening after the treasure hunt clues are passed out, a quiet chaos erupts when one of the guests is found electrocuted.

MacDonald requests all the guests stay while he summons his police force to check out the circumstances. Meantime, he begins to question the guests. The police do a thorough check and deem it to be an accident caused by faulty wiring and leave. But MacDonald has a nagging feeling that something isn’t right – and like a dog hanging onto a postman’s leg, he can’t let go.

What the inspector finds out is that all the guests seem to be doing their own share of snooping with some guests acting rather suspiciously. There was also a sighting of a mysterious grey haired man during the hunt who was not on the guest list. And as MacDonald digs deeper he wonders if this involves a burglary gone wrong – perhaps someone was after the valuable antiques, stamp collection or rare books.

But when an acquaintance of the victim commits suicide, MacDonald knows that unraveling this mystery and motive will be a lot harder than the clues for the treasure hunt. No one is above suspicion – not even the hosts.

This crime classic is filled with the logical deductions and quietness of old-school Sherlock Holmes. Written in a different time period makes this even more interesting and appealing. Embrace it on a chilly evening with a hot cup of coffee or tea. E.C.R. Lorac’s These Names Make Clues is a superior mystery enabled by a well-done cast of guests who are not who they appear to be, and harboring their own personal secrets.

Want more British Library Crime Classics and other mysteries and thrillers? Check out the Books/Mystery Category on this site.

A copy of this book and cover photo were provided by Poisoned Pen Press/Sourcebooks.