Murder Gets A Makeover by Laura Levine

Written on 9 September 2021. Posted in Mystery. 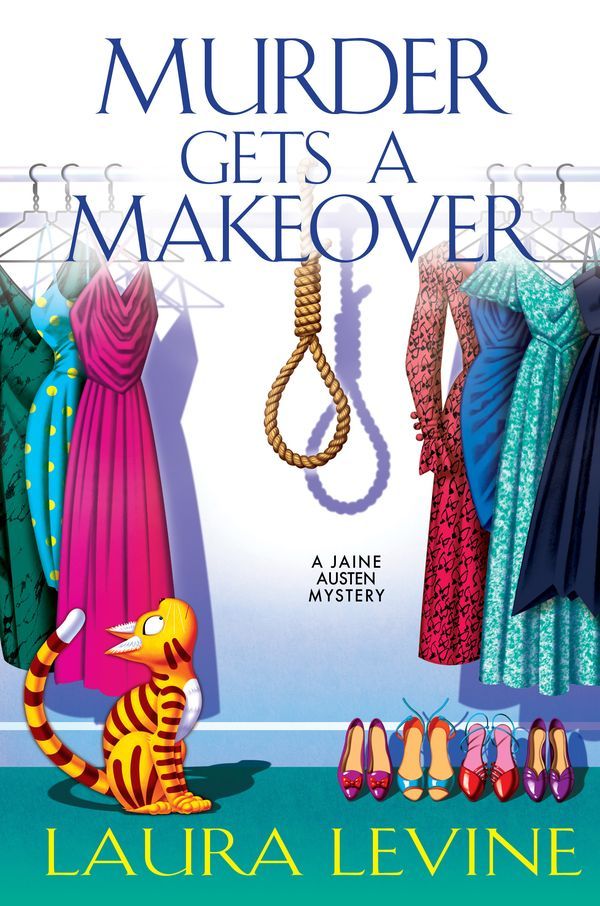 Based on the very first page of Murder Gets a Makeover, I knew that I was (once again), going to be taken on a fun ride! For those of you following the escapades of struggling freelance writer, Jaine Austen, and her aptly named cat, Prozac, this new book is being released at the end of September. And it’s a winner!

And for those of you who haven’t followed The Jaine Austen Mystery series, it’s “must read” for cozy mystery fans who like a lotta laughs and off-the-wall humor in their killer cozies.

In Murder Gets a Makeover, we find our heroine, Jaine, being somewhat bamboozled into a high-fashion makeover by her flippant, charismatic neighbor, Lance. Lance has gotten her hooked up with Bebe Braddock, stylist to the stars!

At first Jaine is pretty darn excited. But Jaine soon discovers that while Bebe may know her stuff when it comes to being a fashionista, the way she manages her own staff is totally reprehensible. Bebe is young, arrogant, insulting and just downright mean. Miles is Bebe’s downtrodden gopher (and hubby). Justin is her personal assistant. Heidi is her hair and makeup maven. Lacey Hunt is an up-and-coming movie star and also Bebe’s hottest client.

But before Jaine can wiggle out of the makeover, she witnesses an explosive exchange between Bebe and an older woman, Tatiana. Apparently Tatiana gave Bebe her start by hiring her as her assistant. And Bebe repays Tatiana’s kindness and mentoring by stealing her clients out from under her!

When someone in Bebe’s empire winds up deader than a door nail, there’s a gaggle of suspects – including Jaine! Here’s the problem. While Jaine really doesn’t have a motive, Jaine’s fingerprints are found all over the murder weapon – OOPS! Now she’s in some really hot hot hot water – and jail stripes are not what she had in mind for her “new look”!

As Jaine starts poking around to find the real killer, she’s wondering if the murder had to do with a blackmail scheme, someone out for revenge, an affair gone wrong – or something else.

As Jaine tries to ferret out the real killer and dredge up some well-hidden motives, she’s also got her hands full with her crazy cat and her crazy parents. Frankly it’s a toss-up as to who is more off the charts at causing caustic chaos! And Ms. Levine also throws in a love interest to keep us smirking and smiling; Jaine has become a young cougar seeking much younger prey! Advice to Jaine: Don those leopard spandex pants, blow out the “big” hair and growl – you go girl!

Funny lady Laura Levine serves up another spicy dish of madcap humor, this time taking aim at the fashion/makeover industry. I had a perpetual smile plastered on my face while I turned each page – Murder Gets A Makeover is a swell, zany ride that’s sure to entertain as the laughs (and the killer) just keep coming!

And if you think “you” got problems – just pick up a copy of Murder Gets A Makeover – you’ll soon forget about all your own troubles as you get sucked into the topsy-turvy world of Jaine Austen in this well-plotted cozy mystery.

Check out the interview with Laura Levine on this site under the “Mystery” category. Ms. Levine has been in comedy with some of the best in the business and is still going strong. Special thanks to Laura Levine — the world can always use more laughter, the world needs Laura Levine!