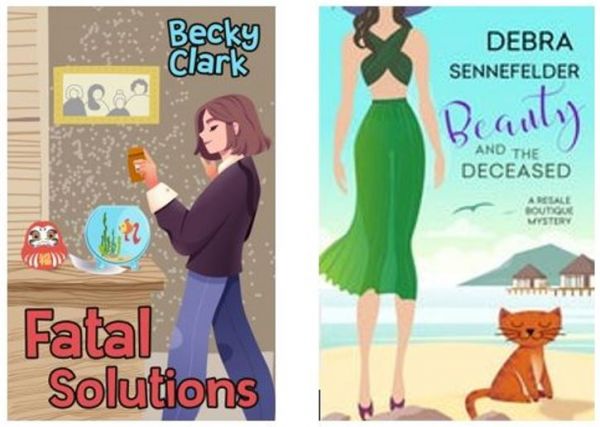 Check out the latest fall cozy mysteries from Lyrical Press, the digital-first imprint from Kensington Publishing!

Creating crossword puzzles for the Chestnut Station Chronicle won’t allow Quinn Carr to quit her diner waitress job any time soon. But it does provide an outlet for her organizational OCD, and also lets her leave subtle hints for police chief Myron Chestnut, an avid puzzler, when his investigations need some direction. Some mysteries, though, leave even Quinn stumped—like the property deed she finds in her grandfather’s old desk. The document lists Quinn’s mother as the owner of some land on the outskirts of Chestnut Station, but Georgeanne refuses to discuss it.

Quinn visits the site, located near a World War II Japanese internment camp that’s since been turned into a museum. There she unearths a weathered Japanese doll…and a skeleton. Before she can uncover a killer, she has to identify the victim. Was it an inmate trying to escape? A guard? Or someone closer to home? As Quinn fills in the blanks, she finds an unexpected link between her family and Chief Chestnut’s—one that could spell more deadly trouble…

ABOUT THE AUTHOR:  A highly functioning chocoholic, Becky Clark is the seventh of eight kids, which explains both her insatiable need for attention and her atrocious table manners. She likes to read funny books so it felt natural to write them, too. She published her first novel in 2001 and is a sought-after speaker. Visit her at www.BeckyClarkBooks.com.

BEAUTY AND THE DECEASED by Debra Sennefelder, A Resale Boutique Mystery #4

Kelly Quinn’s Long Island consignment shop offers high style at secondhand prices—but when a body is found on the beach, she needs to start hunting for a wolf in sheep’s clothing . . .

Kelly is thrilled when she gets a visit from a cousin she hasn’t seen in years. Becky’s cosmetics company is taking off, and she just might have laid the foundation for a big-money buyout. It’s a time to celebrate—but Kelly is heartbroken when a killer puts an end to their happy reunion during a mysterious midnight meeting near the shore.

Despite multiple warnings to steer clear, Kelly starts shadowing a variety of suspects both inside and outside the beauty business—when she isn’t busy filling the racks of the Lucky Cove Resale Boutique with lots of new inventory from a local shopaholic. Gossip and accusations are flying, but there’s no glossing over this ugly crime, and she’s going to make sure the culprit faces justice…

ABOUT THE AUTHOR:  Debra Sennefelder is an avid reader who reads across a range of genres, but mystery fiction is her obsession. Her interest in people and relationships is channeled into her novels against a backdrop of crime and mystery. When she’s not reading, she enjoys cooking and baking and as a former food blogger, she is constantly taking photographs of her food. Yeah, she’s that person. Born and raised in New York City, where she majored in her hobby of fashion buying, she now lives and writes in Connecticut with her family. She’s worked in retail and publishing before becoming a full-time author. Her writing companion is her adorable and slightly spoiled Shih-Tzu, Connie.

Authors and publishers can contact Ann I. Wonder at:  ann@wonderwomensixty.com