A Time To Swill by Sherry Harris 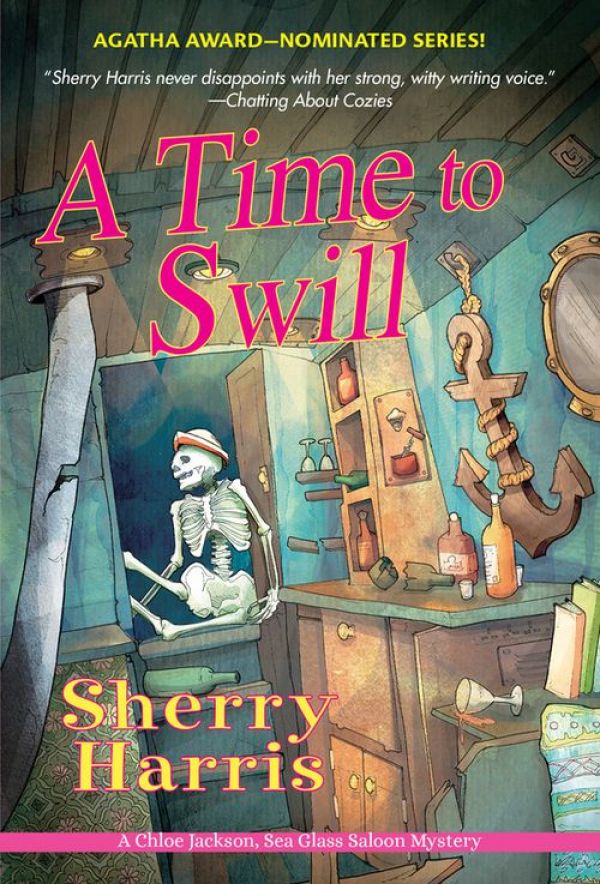 Sherry Harris just can’t stop herself from giving us great cozy mysteries!  A Time To Swill is her newest entry in her Chloe Jackson, Sea Glass Saloon Mysteries.

Chloe Jackson has left her former life and moved to Florida. She’s here to fulfill a last request from one of her dearest friends, Boone, who sadly perished in Afghanistan. It’s a whole different world for her in so many ways. Boone had a seaside beach house and was also co-owner of the local bar, the Sea Glass Saloon. So now, much to her surprise, she is the new owner of his house and part owner of the bar!

One morning Chloe wakes up to the sound of angry, pounding waves outside her beach house. It’s just before dawn, but she finds herself putting on her running gear and heading outside. The ocean is volatile and the beach is heavily ladened with fog …. a perfect setting for a perfect cozy!

The fog opens up just enough for Chloe to catch a glimpse of a massive sailboat – and then she hears a muffled sound of a baby crying from inside the drifting boat!

What happens after that becomes a tightly knit mystery surrounding the sailboat, a mysterious “red” boat, an old hat, a missing wife and of course, the usual pesky dead body!

But the real mystery started over a decade ago when a group of friends went out for a boat ride and never came back! The locals all had their theories and speculations – but whatever happened on that fateful trip was never known.

This is a subtle cozy – and like the force of a riptide, will pull you into it’s grip. Chloe finds herself faced with two mysteries – one from the present and one from the past.

You’ll meet a solid line-up of characters: Ann: who is known as the local “Equalizer,” Mary Moore (ace reporter), Steve Kincheloe (Boone’s worthless dad), Rip (Chloe’s “kind of” boyfriend), a sketchy lawyer, a somewhat shady defense contractor and others who are added into the equation. And the bottom line in this equation is “murder.”

Fall and winter are great times to enjoy a good mystery. Be sure to add A Time To Swill to your reading list – it’s a smooth sailing cozy from Sherry Harris and it’s sure to keep you entertained.