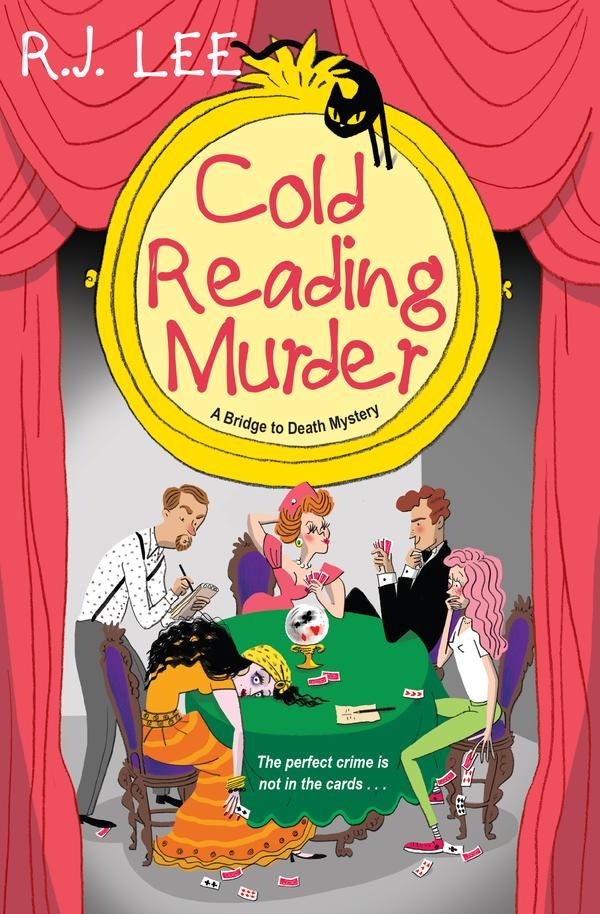 They say “twice makes thrice” and in this case, the old adage holds true. Author R.J. Lee gives us a Cold Reading Murder – the 3rd installment in his stellar “Bridge To Death Mysteries.” And yes, as far as I’m concerned, he’s knocked this mystery series out of the ballpark, 3 times in a row!

The setting is Rosalie, an old-money town along the Mississippi River. The characters are so “deep-south real” that you can’t escape being lured into R.J.’s tightly woven plots – plots that are sure to please the pickiest of cozy mystery readers.

In Cold Reading Murder, we find newly wedded Wendy Winchester Rierson and Ross, her detective hubby, just getting settled into their new life together. Wendy is a reporter for the local Citizen newspaper, and is also taking the lead in the newly formed Rosalie Bridge Club.

It’s a challenge balancing her new lifestyle, her job and teaching 5 newbie bridge players the ins and outs of the age-old game of bridge. The quirky group of 5 is up to the challenge. There’s also a new psychic in town, Aurelia Spangler. Not only does Aurelia claim to see the future, but she’s an avid bridge player and member of the bridge club.

She invites Wendy to host her first bridge lesson with the “newbies” at her rented mansion, Overview. Overview has a haunted reputation – perfect for the resident psychic. Aurelia is a splendid host. She supplies plenty of food and beverages throughout the lesson, and afterwards, offers to give each newbie a complimentary “cold reading.”

To everyone’s astonishment, Aurelia’s readings seem to be right on the money, but some of the readings come with stern and downright frightening warnings that trouble is coming to call.

Sure enough, a short time later – one of the bridge group is found dead, leaving behind a short suicide note and traces of cocaine. It’s gotten everyone in town talking – and Wendy, being the ace reporter/amateur sleuth that she is, doesn’t believe for one minute that this was a suicide.

She hasn’t quite convinced Ross or her chief of police daddy, Bax, that this is a conveniently covered up case of murder. Now she has to consider that someone in the bridge club could be a cold-blooded killer and she’s not going to stop until she uncovers the truth.

Cold Reading Murder is heavily ladened with an assorted cast of southern fried characters including: wealthy widows, a sassy housekeeper, fun-loving party planners, a writer from Omaha, a college student battling with her bible-thumping mom, a singing telegram guy – and even a donkey! R.J.’s authenticity in his mysteries and his obvious skill at the game of bridge dealt with dashes of murder, make this series (as Robert Palmer sang in the 80’s) “Simply Irresistible.”

Want more of R.J. Lee? Watch for our review of The King Falls (book 4) as well as an exclusive interview with the author – all coming soon!

A copy of this book and photo were provided by the publisher, Kensington Publishing, a paid sponsor of Wonder Women Sixty.