Reading Between the Crimes by Kate Young 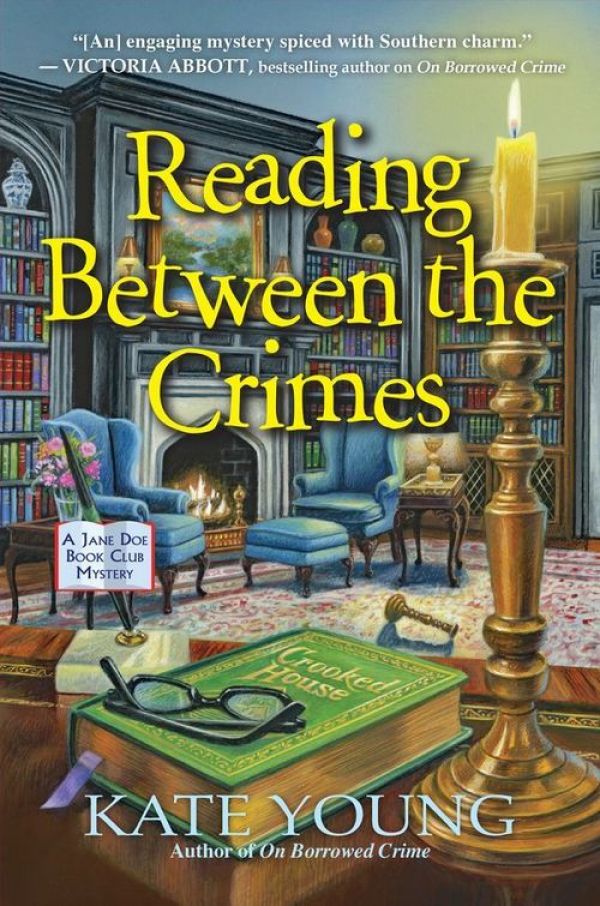 Crooked Lane Books recently released: Reading Between the Crimes. This is the perfect cozy mystery to kick “fall” into gear. Kate Young, gives us yet another tale that’s sure to please the most picky cozy mystery fan.

It’s fall in the idyllic town of Sweet Mountain, Georgia. Lyla Moody has been working for almost two years for Cousins Investigative Services, Inc. She’s the receptionist and also a “PI in training.” Being an avid mystery buff since she was young, working for Cousins is a gig she’s come to love and enjoy.

But Lyla’s love of intrigue didn’t stop there. She’s also one of the founders of the local Jane Doe Book Club, established for the town’s true crime and mystery fans. There she became friends with the members, including the local librarian, Harper Richardson. Harper and her much older, controlling husband, Leonard, moved to Sweet Mountain a year and a half ago.

Lyla’s mom, Frances, has become tight friends with Harper. One day Frances notices Harper just isn’t herself – something is “off.” Harper’s steadfast and competent demeanor has changed. Her concentration is disappearing, and she seems very sad and distant. Her mother takes Harper under her protective wing, becoming extremely secretive about what kind of trouble Harper is in.

And Frances certainly has her hands full. She’s spending a lot of time with Harper – giving her a solid shoulder to lean on while preparing to host a local charity event in her home. When the big event arrives, the fundraiser draws a massive crowd. Even Harper shows up to show her support.

When Lyla and her Gran arrive at the fundraiser, they are shocked to see the hordes of people. They push their way through the crowd and make their way to the kitchen, then to the newly added addition to the house – the library. But there’s more than books in the library – like the body crumpled on the floor!

Then things just go from bad to weird. Apparently the corpse was someone close to Harper. And it wasn’t natural causes, it was straight up murder!

Lyla’s PI training rises to the occasion when Harper is arrested for the murder.  Lyla and Frances are shocked and appalled. They know that Harper has been an abused woman – and now she’s a helpless victim of circumstance.

While Lyla investigates, desperately trying to prove Harper is innocent, she meets up with Leonard’s darkly sinister and bizarre family. In her opinion, the whole clan except for Leonard’s son LJ, should have been locked away years ago. They are a mean, callous, manipulative and conniving bunch — topped off with excessive greed. This gets Lyla wondering if one of them could be the killer or maybe even someone else close to Harper.

This is a fantastic mystery filled with multiple family secrets and has more twists and turns than a rubik’s cube! If you like your mysteries with a good “gasp” at the end and the “wow” factor, this book is for you. Kate Young brings us another stellar mystery that’s sure to keep you thinking about it after the killer is revealed.

A copy of this book/photo was provided by the publisher.