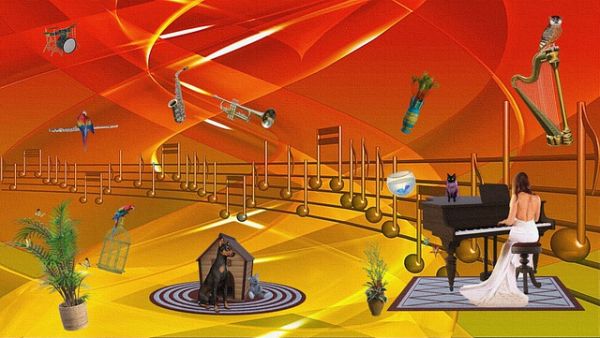 Through the decades, happy and downright silly songs filled the airwaves, tugging at our hearts and sticking in our heads with their infectious beats or lyrics. Some absolutely made no sense at all – what the heck was a Do Wah Diddy and what did it do? And who did put the “Bomp” in the Bomp, Bomp, Bomp? But what exactly was a “bomp” – or for that matter, a “rama lama ding dong”? Frankly, it just didn’t matter then and still doesn’t now– just go with it!

Then there were the happy and silly story songs. We had Pac Man Fever driving us crazy, and we cruised down the highway to the B-52’s mythical Love Shack. Other artists brought on the animals: tales of unicorns, rock lobsters, kangaroos (being tied down), camels at the Oasis (being sent to bed) and, move over Bigfoot, we had a One-Eyed Purple People Eater!

In the 60’s there were catchy stories like Jeannie C. Riley’s mom sockin’ it to the two-faced Harper Valley PTA and the Fireballs lamenting about their Bottle of Wine. The 80’s gave us Jenny’s phone number off of a bathroom wall, Ray Parker, Jr. had everyone calling Ghostbusters, Elvis had us in stripes rockin’ the jailhouse and the Vapors had us Turning Japanese!

But in my book, Ray Stevens was “the king” of silly, fun songs. He gave us a barrage of 60’s and 70’s Billboard Hits that tickled our fancy. Among them: Ahab The Arab, Gitarzan and my personal favorite, The Streak. I still roll on the floor every time I hear his twangy voice yelling to his wife: “Don’t look, Ethel (but it was too late).” Ray also gave us the longest song title I’ve ever seen: Jeremiah Peabody’s Poly Unsaturated Quick Dissolving Fast Acting Pleasant Tasting Green And Purple Pills!

So let’s grab our sense of humor as we step into the vault of happy, silly songs. Singalong, dance along, and let those humorous/good time memories shine through! Check them out on YouTube, load them into your favorite devices – just have some fun! Solidly Happy, Solidly Silly:

No Parking on the Dance Floor – Midnight Star ‘83

Midnight at the Oasis – Maria Muldaur ‘84