Written on 12 May 2021. Posted in Kensington Mysteries. 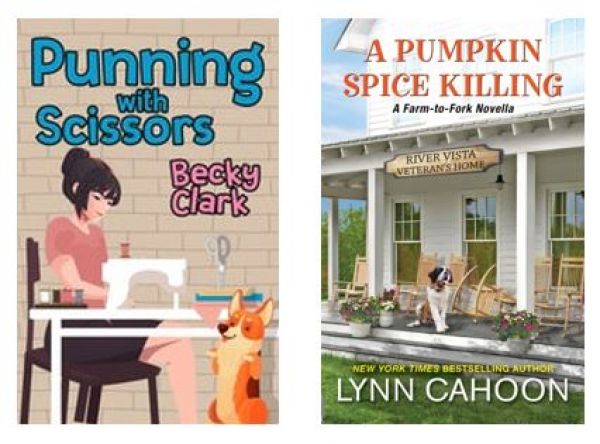 Become Your Own Sleuth this Summer with Cozy Mysteries from Kensington!

Check out the latest cozy mysteries from Lyrical Press, the digital-first imprint from Kensington Publishing!

PUNNING WITH SCISSORS by Becky Clark, A Crossword Puzzle Mystery #2

1 DOWN: A PERSON OF INTEREST

Quinn Carr has been quietly creating crosswords for the Chestnut Station Chronicle in her small Colorado town since she was in high school, but she has yet to solve the puzzle of how to make a living from her passion. So she lives with her parents and works at the local diner, catering to regulars like The Retireds, a charming if cantankerous crew of elderly men. The most recent member to join the group is a recently retired tailor, the unfortunately named Hugh Pugh.

But Hugh’s misfortune dramatically increases when he’s arrested for stabbing his husband with a pair of fabric shears. With a cryptic crossword clue left at the crime scene, Quinn seems tailor-made for solving this murder. The local police may be determined to pin the crime on the kindly tailor, but Quinn will use her penchant for puzzles and what her therapist calls her “obsessive coping mechanism” to get the clues to line up and catch the real culprit—before the killer boxes her in. . . .

A highly functioning chocoholic, Becky Clark is the seventh of eight kids, which explains both her insatiable need for attention and her atrocious table manners. She likes to read funny books so it felt natural to write them, too. She published her first novel in 2001 and is a sought-after speaker. Visit her at www.BeckyClarkBooks.com

Angie Turner’s Idaho restaurant, the County Seat, owes its success not only to its farm-fresh fair, but also to its devoted and passionate staff. But a team-building retreat turns into much more than they bargained for . . .

Angie and her County Seat staff are all prepared for some much-needed R&R. Hope’s been hinting at an arts-and-crafts themed retreat. Instead, they end up at a military veteran’s home, where it’s their job to get it spic and span for summer. In between weeding the garden and painting the rooms, Angie starts up a conversation with an older vet who wants to make amends with his son before it’s too late. Unfortunately, he has no idea of his son’s whereabouts. It’s the perfect side job for the County Seat team, but someone keeps blocking their efforts. And the more they try to find out why, the more they’re certain someone’s life might be in danger . . .

New York Times and USA Today best-selling author Lynn Cahoon is an Idaho expat. She grew up living the small town life she now loves to write about. Currently, she’s living with her husband and two fur babies in a small historic town on the banks of the Mississippi river where her imagination tends to wander. Guidebook to Murder, Book 1 of the Tourist Trap series, won the 2015 Reader’s Crown award for Mystery Fiction. Visit her at www.LynnCahoon.com.