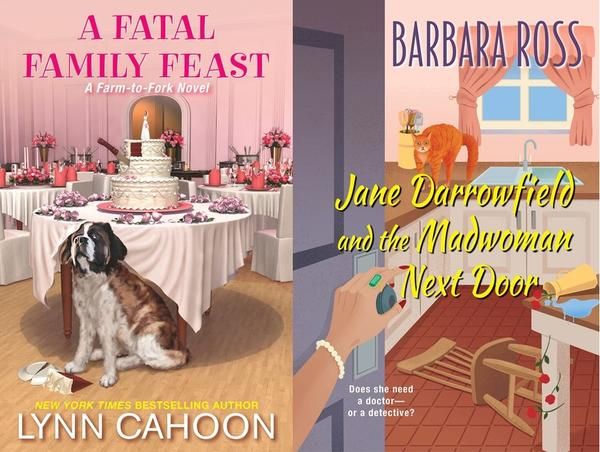 Check out the latest cozy mysteries this January from Kensington Cozies and Lyrical Press!

A FATAL FAMILY FEAST by Lynn Cahoon, A Farm-To-Fork Mystery #6

Angie Turner’s Idaho restaurant, the County Seat, is the perfect site for a picturesque country wedding, but the party planning skids to a halt when the groom-to-be is implicated in a murder investigation…

When Angie’s best friend and business partner, Felicia Williams, picks the County Seat to host her upcoming nuptials, Angie wants it to feel like a family affair–especially since Felicia is set to marry the farm-to-fork restaurant’s talented sous chef, Estebe Blackstone. Unfortunately, the bride’s actual family is far less enthusiastic about the union. They’re pulling out all the stops to cancel the couple’s wedding, even arranging for a surprise visit from Felicia’s ex-fiancé (and her father’s current lackey). But when her ex is killed days before the ceremony and Estebe is framed for the crime, Angie and the County Seat crew must scramble to solve the murder and save the wedding . . .

JANE DARROWFIELD AND THE MADWOMAN NEXT DOOR by Barbara Ross, A Jane Darrowfield Mystery #2

Jane Darrowfield is using her retirement years to work as a professional busybody in her West Cambridge, Massachusetts community–but this time her client is a woman next door who thinks someone is following her…

Megan, who’s purchased the house next to Jane’s, needs some help from her snooping neighbor. Megan’s been having blackouts, hearing voices—and feeling like someone’s following her. Are these symptoms of an illness—or signs that she’s in danger?

Considering the extensive security system in Megan’s house, it seems like she should be safe—yet she soon vanishes into thin air. Some think she’s run away, but would this ambitious young lawyer on the partner track really miss a meeting with an important client? And where’s Megan’s cat?

The mystery is about to deepen when the cat is finally located in a hidden panic room—and as Jane and the police look into Megan’s friends, family, and past, it may be time to sound the alarm…