Murder, She Edited by Kaitlyn Dunnett 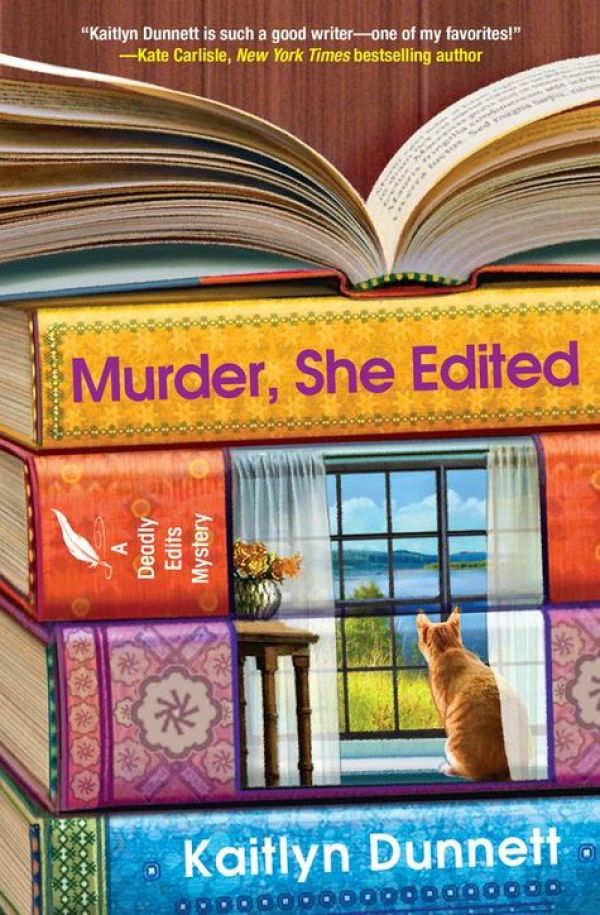 Murder She Edited is the fourth and newest in the Deadly Edits Mystery Series, and Kaitlyn Dunnett has “out-dunn” herself once again! How Ms. Dunnett can keep churning out some of the best cozy mysteries out there, year after year, is beyond me! You’d think she’d finally run out of ideas!

But NO! Murder, She Edited is going down as one of my favorite cozies – ever! This has a plot so tricky and convoluted that I just couldn’t put it down.

Semi-retired, sixty plus Mikki Lincoln has gone back to her roots. Lenape Hallow is a small town in the foothills of the Catskill Mountains. With her cat, Calpurnia, by her side, Mikki works from her home doing freelance editing for various clients.

Things have been busy, but fairly quiet – that is until her late mother’s childhood friend, Tessa Swarthout, dies. Over the years, Mikki lost touch with Tessa — in fact, she was shocked to learn Tessa made it to 102 before she died! But even more shocking was the letter she received from Tessa’s lawyer — she was about to inherit a parcel of land including the house and other buildings on Tessa’s property!

But like my mom used to say, when things are too good to be true, there’s usually a catch – and in this case, it’s a big one! In order to claim her inheritance, Mikki has one month to find some lost diaries in Tessa’s old house. But it doesn’t end there. She also has to edit whatever is in those diaries, post the transcripts on the internet and create an e-book! Tessa even provided the sites on which the transcripts were to be posted – 102 and computer savvy to boot!

Since Mikki loves a good mystery, she accepts the challenge of finding the hidden diaries. Tessa’s somewhat shifty lawyer, Leland Featherstone, was clueless – literally! He had no idea as to who wrote the diaries, how many there were or what was in them.

Mikki wastes no time in telling her BFF, Darlene, about the strange inheritance. Darlene, being a retired librarian, still grooves on doing research and is more than willing to start doing some digging while Mikki makes the 40 minute trip to meet Mr. Featherstone at Tessa’s old house. The land and house are quite isolated – and the house is eerily frozen in time.

As Mikki embarks on her strange quest of the mysterious diaries, she’s lured into a cold-case murder from the 50’s. Armchair detectives will revel in trying to figure out exactly what is in those missing diaries, who wrote them and why Tessa was so desperate to have them published after her death.

Cold cases never close – the only thing they can get do is get warmer. Ms. Dunnett loads us up with sinister goings-on at Tessa’s property and viable suspects making this cold case hot hot hot!

Murder, She Edited is a positively captivating cozy with a very unique plot. This is Kaitlyn Dunnett’s newest release and it’s AVAILABLE ON JULY 27TH!!! Don’t let this one slip by you – it’s a “must read” for cozy fans! And don’t forget to check out the other Deadly Edits mysteries and her Liss MacCrimmon Scottish mysteries, too – all good stuff for avid cozy fans!

A complimentary copy of this book was provided by the author. Murder, She Edited is published by Kensington Publishing, a paid sponsor of Wonder Women Sixty.