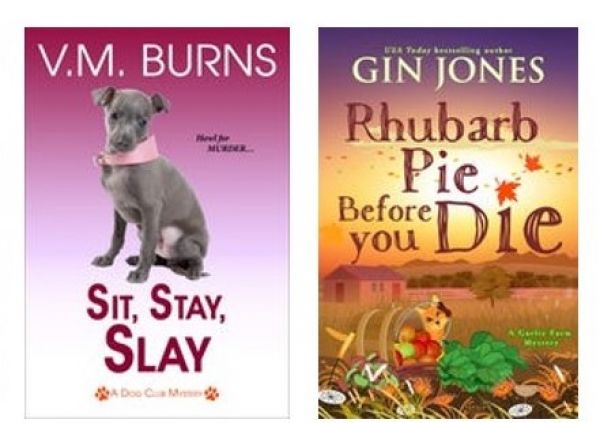 Winter weather?  No problem!  Snuggle in with more of our latest cozy mysteries  from Lyrical Press, the digital-first imprint from Kensington Publishing!

When her best friend Dixie is suspected of killing a dog show judge, Lilly must bring one sick puppy to heel . . .

Tennessee transplant Lilly Echosby has two great loves: dogs and mysteries. So naturally she’s named her poodles Aggie, after Agatha Christie, and Rex, for Rex Stout. Now that she has two dogs to manage, it makes sense to enter Aggie in an obedience competition—especially since her instructor is Lilly’s gal pal, Scarlet “Dixie” Jefferson.

But when one of the judges for the competition turns out to be Dixie’s high school rival, the dog trainer gets hot under the collar. When the woman is found strangled, Dixie becomes the number one suspect. With the help of the other dog club members, Lilly must find the real killer—before the next judge Dixie tangles with throws the book at her . . .

RHUBARB PIE BEFORE YOU DIE by Gin Jones, A Garlic Farm Mystery

Inheriting her late aunt’s Massachusetts farm is no gift for app developer Mabel Skinner, who is about to learn that even the best-grown garlic can’t ward off murderous intent…

Mabel’s hope of finding an enthusiastic farmer to buy Stinkin’ Stuff Farm is dying a little bit every day. So far, all she’s found are double-dealing developers. But after a heated dispute over grass clippings with an obsessive local rhubarb breeder, she discovers something even more distressing—the breeder in question undisputedly dead in his greenhouse. . . .

Uncomfortably aware that she might be a prime suspect, Mabel stops digging in the dirt long enough to dig up more information about the dead man, and anyone else he might have argued with. The list is longer than she imagined, and includes a persnickety neighbor and a rival rhubarb breeder. With all the ingredients for a homegrown mystery, Mabel must unearth a killer—before the next plot to be dug is her grave. . . .

A complimentary copy of this book was provided by the publisher.  Kensington Publishing is a paid sponsor of Wonder Women Sixty.   For sponsorship info contact:  ann@wonderwomensixty.com