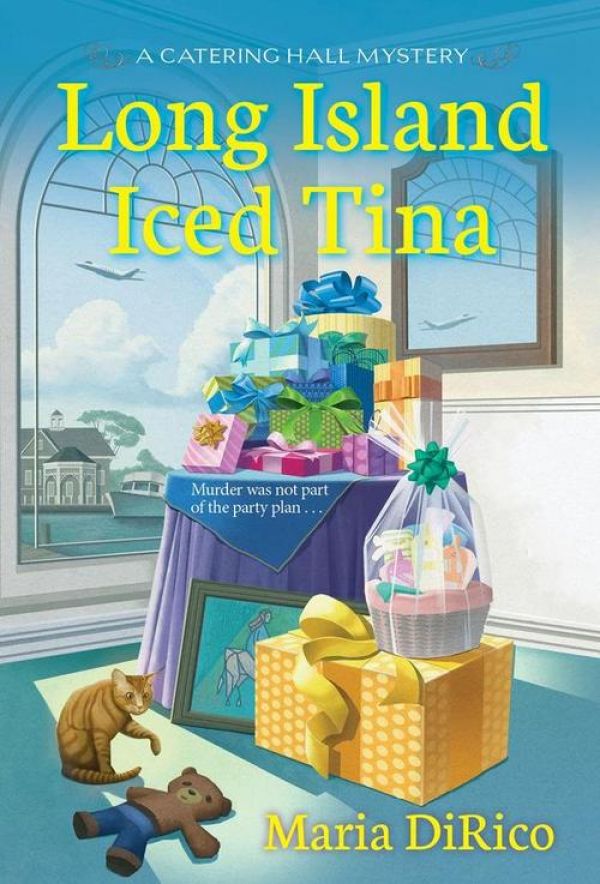 Long Island Iced Tina is the second in Maria DiRico’s new exhilarating series, Catering Hall Mysteries.  It is an engaging burst of fresh air and chocked with colorful characters that will have you laughing, rolling your eyes and scratching your head, as you try to figure out this twisty tale of murder most artful (literally).

In 1953, Dean Martin’s signature song was That’s Amore.  “Amore,” in Italian, means “love.”  And that’s how I feel about Long Island Iced Tina – I LOVE IT!  It’s a cozy that’s simply not to be missed!

Mia Carina is back in the borough of Queens.  She’s in charge of the family catering hall, the Belle View, acquired by her mobster father, Ravello Carina, as payment for a gambling debt.  But life has a way a taking some unexpected turns, and Ravello finds himself having a radical life-style change – he’s running the Belle View as a legitimate business with the help of his daughter – he’s gone straight!

Ms. DiRico plays up the family’s Italian heritage, lending a unique credence to this cozy mystery.  Her character, Mia, shares a house with her old-school Italian Nonna (grandma), whose riotous attitude is enough to make you shout “Momma Mia” and is bound to keep you smiling.

But there’s nothing to smile about at her good friend, Nicole’s, baby shower at Belle View’s competitor, the swanky Versailles on the Park in Queens.  The high-end shower was orchestrated by Tina, Nicole’s outrageous and seriously delusional stepmom.  When Nicole unwraps a shower gift of an exceptionally gaudy painting, both Nicole and Tina are left speechless.

Shortly after the shower ends, Mia discovers a dead body floating in the nearby marina – and uh oh, it’s one of the shower guests!  Things really heat up when the police start eyeing Nicole and her family as possible suspects.  With the baby due at any time, Mia feels very protective of her friend. Mia is compelled to step in and do some snooping on her own to see if she can figure out what’s really going on – and it ultimately involves bringing a long ago art theft back into the limelight.

When it comes to characters that are nefarious, loveable and just plain zany, DiRico doesn’t hold back!  You’ve got “new hire” Benjy, who is so dense and completely out there that he has Mia wondering if he’s a plant to sabotage their business.   Cammie, Belle View’s event planner, is pure entertainment as she shamelessly admits that her day job, thankfully, is never a full day of work.  After all, a gal gotta get her priorities in order – like getting her hair and nails done first — work, second!

This fun and light-hearted cozy will keep you wondering if some or all of the players tie together as you try to sniff out the real killer or killers.  You’ll weed through an abundance of suspects including an art collection gallery owner and his family, a suspicious art dealer, the Versailles general manager, an ex-art thief, a nosey reporter and plenty of mob families who are lurking in the background.  What more could you ask for?  NOTHING – IT’S ALL “HERE!”

Maria DiRico (also known as the author Ellen Byron) has ponied up with Kensington Publishing to bring you another solid series with laughs, entertainment and plenty of that old-fashioned Italian swagger!

LONG ISLAND ICED TINA is due out in a few days — FEB. 21ST – grab yourself a copy!

Check out the: BOOKS/Mystery Category on this site for an interview with Maria DiRico/Ellen Byron, and also a review of the first in her new Catering Hall series, Here Comes the Body as well as some of her Cajun Country Mystery series (as Ellen Byron).

For information on sponsorship and advertising contact me at:  ann@wonderwomensixty.com.