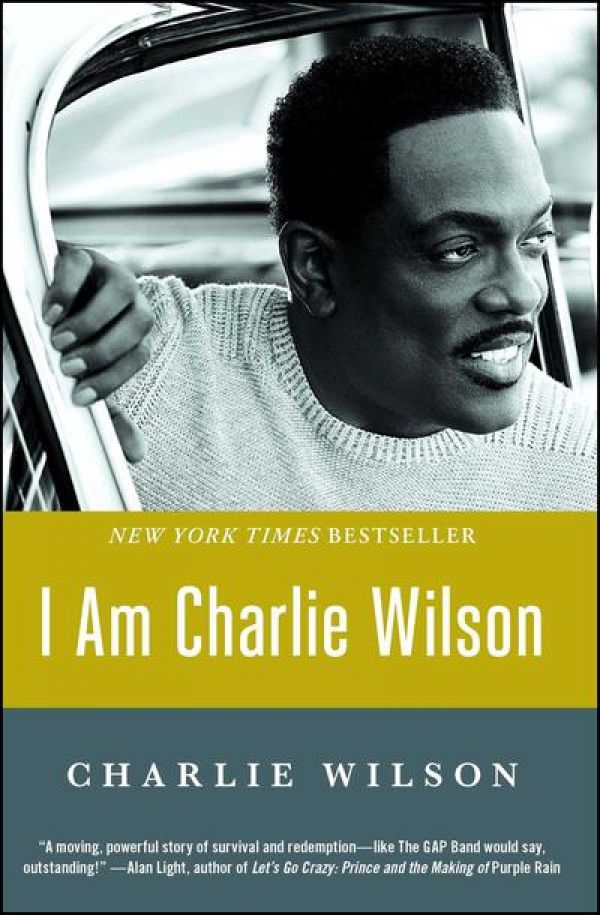 Of all the books I’ve read this year (and believe me, I’ve read A LOT), I Am Charlie Wilson is my favorite!

It’s the story of Charlie Wilson of The Gap Band fame. The book takes you from the very beginning when he and his brothers and sister were just kids, growing up in a house filled with gospel music (and only gospel music).

It’s a powerful, moving story of how Charlie Wilson and The Gap Band came about and rose to fame in the 70’s and 80’s.  It’s a story about how Charlie Wilson, as a young man, personally found fame, lost fame, hit “rock bottom” – then in later years, with the help of God, was given another chance.

This book gives us an “insider’s look” into the music scene through Charlie’s eyes, as he and his brothers struggled to build their ultimate music career as The Gap Band.  It’s a fascinating story detailing the band’s struggles and undying persistence before finally making it to the top.

Following Charlie’s personal story and how he interacted and became friends with talented artists like Stevie Wonder, Quincy Jones, Rick James and Snoop Dogg (just to name a few), was mesmerizing.  How he met his wife and soul mate, is a love story in itself – adding a touch of sweetness and depth.

Today Charlie, now in his sixties, is enjoying a second wind, a stellar solo career and can STILL sing his heart out – not only to his fans, but to The Lord.  Charlie Wilson (or Uncle Charlie as he was dubbed by Snoop Dogg) with his strong and vibrant personality, is a man who is blessed.  He’s shouting it to the world — and WE’RE LISTENING!

Still as handsome as ever, I can’t help but wonder if he was a ZZ Top fan, because he’s the epitome of a classy “Sharp Dressed Man!”  I saw him perform a few years ago at Wolf Trap in Virginia – and he’s a force to be reckoned with (read my review under the “music category”).  One of the best concerts EVER.  I’m hoping one day he’ll be back touring when all this Covid crap is behind us.

Who should read this book?  Anyone feeling down, feeling hopeless or trying to get their life back on track – this book has the power to give them hope.  For anyone who loves music, this book is a “must” for their collection.  For anyone who needs a little motivation – this can provide it.  For anyone who just wants a solid, entertaining story with a positive, happy ending — they can’t go wrong.

I Am Charlie Wilson was released in 2016 and is still available online at your favorite book retailers.  Published by Atria/Simon and Schuster.

And don’t forget about Charlie’s solo albums.  They are filled with smooth grooves, intense vocals, positive messages, and beautiful (and, sometimes downright sexy), love songs.  His songs can be light, breezy and airy with an effortless flow that only Charlie Wilson can give us.  His voice is so strong, so pristine, that it’s hard to believe this was once a man who fell victim to drugs and alcohol and wound up living on the streets!

Check out his 2017 album release:  In It To Win It, a truly upbeat, inspirational album that will have you jumping around in your home or singing in your car.  His album:  Charlie Wilson, Love, Charlie, includes one of my Wilson favorites, “I Think I’m In Love”.

His silky voice comes shining through as he sings about the love of his woman in “My Girl Is A Dime,” from his Charlie Wilson – Just Charlie album.  He even dishes out his own dose of rap on “So Hot” (featuring Twista) from his album:  Charlie, Last name Wilson.  His solo albums are solid. They are Charlie Wilson at his best – vocally, mentally and spiritually.

But there are some days I just gotta get funky with The Best of The Gap Band. “You Dropped A Bomb on Me” with its missile launching whistle is downright infectious, while “Burn Rubber On Me (why you wanna hurt me),” revs up everyone’s motor.  I’ll jump on their Party Train any day!  All good stuff, and just like Uncle Charlie, still standing that test of time!

LADIES:  If you loved the romantic sensuality of Barry White, check out any of Charlie Wilson’s solo albums — you won’t be disappointed!