Hop ‘Til You Drop by J.M. Griffin 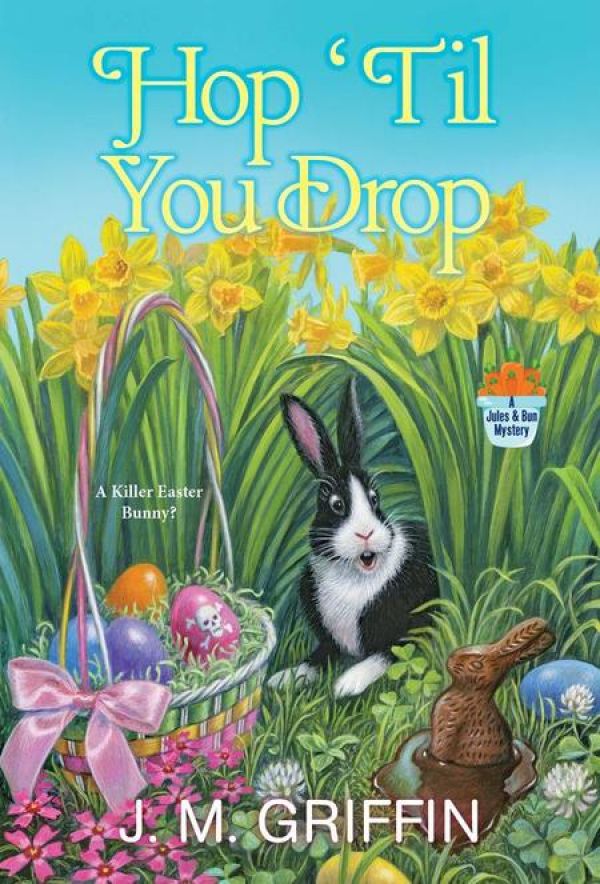 Spring has sprung and along with it comes the adorable Easter themed cozy, Hop ‘Til You Drop by J.M. Griffin.

Juliette “Jules” Bridge owns the Fur Bridge Farm in rural New Hampshire outside of Windermere.  The farm is a rabbit rescue and rehab sanctuary for neglected and abused rabbits.

This year, she and her favorite pet rabbit, Bun, are excited to be volunteering for Windermere’s Easter celebration, the Hop ‘Til You Drop event.  She’s one of the helpers hiding colorful eggs for the event’s egg hunt.   Jules has Bun safely tucked into his sling that ties around her waist and then over her shoulder and torso.  It’s the perfect pet carrier to take Bun to various events and for running local errands…Bun loves to travel!

But Bun is certainly no ordinary rabbit.  While there are cozies featuring canine sleuths and feline sleuths – this one features, Bun, who quite accidentally, became a rabbit sleuth!  With Jules as his partner, together they’ve put some dastardly villains behind bars where they belong.  Nope – he’s not a talking rabbit.  He is, however, able to communicate with Jules via mental telepathy.

And things really start hopping when Jules and Bun get busy hiding Easter eggs for the festival.  There’s plenty of places along the event trail to hide the eggs.  Brightly colored eggs, chocolate bunnies and marshmallow treats are everything any kid (or adult) would be glad to add to their Easter stash – but a dead body – not so much!  And that’s exactly what they find!

It’s bad enough Jules and Bun have stumbled onto a murder scene, but Jules does a double take when she catches a glimpse of a tall, 2-legged rabbit fleeing the scene!

When the local Sheriff shows up, he finds a bizarre setting — a body surrounded by grotesque Easter eggs and lily of the valley flowers.  He begins to realize that he’s got more than he can handle – everyone involved with the event are all potential suspects.  With not enough officers to help him work on the case, he quietly enlists some help from Jules.   He knows there’s something about her that makes people open up to her and trust her.  She’s familiar with the event staff and volunteers, and the sheriff figures them to be the most likely pool of suspects.

Jules is eager to accept – she knows there’s a killer in town and it’s not the Easter bunny!   With Bun’s astute powers of observation, Jules begins casually talking to everyone in charge of the event, the helpers and local business owners.

They find a lost medallion that may be connected to this cold-hearted murder.  They discover there’s some something shady going on with the local college.  They even find out that some of the most respected folks in town seem to be hiding behind a façade.

Bun and Jules realize they must be getting close.  Someone out there is trying to take Jules out – and I don’t mean for a date!

Bun is to Jules like Mister Ed was to Wilbur – what a perfect team!  With ample characters sure to keep you entertained, Bun to keep you smiling and a wily whodunit plot, Hop ‘Til You Drop is a surefire way to kick off your spring cozy reading.