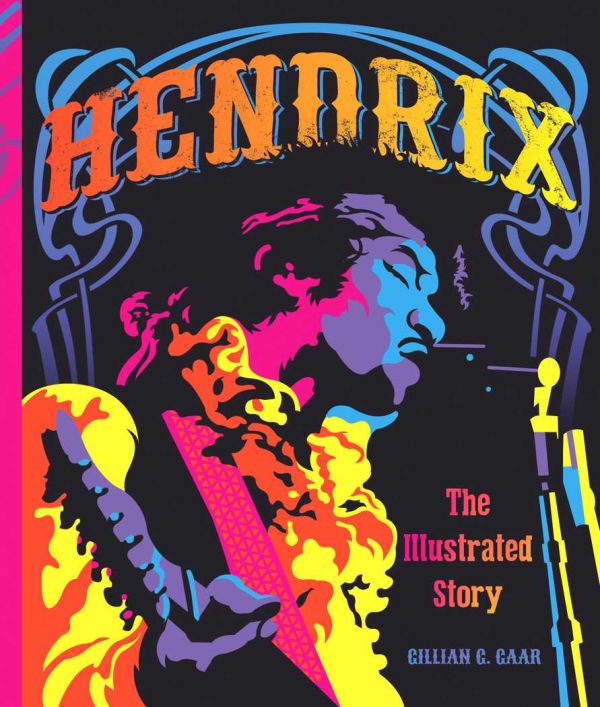 Of all the books published on Jimi Hendrix, Hendrix, The Illustrated Story by Gillian G. Gaar is my personal favorite.  Why?  Because it truly lives up to its title.  It takes us on a Hendrix journey from start to finish.  From when he was born, to his death, and everything in between, it is the “complete” story of Johnny Allen Hendrix, born in 1942 in Seattle, Washington.

It’s a coffee table book (9 ½” x 11 1/2”, 221 pages) that not only gives us incredible details about Jimi’s life and his group, The Experience, but is also lavishly filled with plenty of photos and illustrations.  The psychedelic art (including rock concert posters), plus 45 record sleeve and LP cover art, are a tribute to the 60’s style and music culture.  This is the kind of book to keep around in plain sight.  Even the book’s cover features an illustrated head shot of Jimi flaunting bold colors on a black velveteen background (reminiscent of those garish oil paintings on velvet that were once so popular).

I can’t say enough good things about this book.  Gaar follows Jimi’s dreams and visions as a young boy.  He has us traveling down the many roads Jimi took while trying to make a name for himself.  Then we’re led to all the crossroads where his choices allowed him to become a sideman, singer and guitar player — eventually bringing him full circle to legendary rock icon.

His childhood was rough and disjointed.  The book even talks about his short stint in the army before he got discharged in 1962 and features a photo of a uniformed Jimi playing the guitar with his U.S. Army band.

This “follow me” story takes you through his ups and downs, highlights of his career and the interaction he had with other prominent musicians.  You’ll go back to the ’67 Monterey Pop Festival for that legendary moment where Jimi set his Strat on fire!  You’ll read the story about his personal struggle to produce and release Electric Ladyland.  He put it all on the line for this double LP that was his “vision” and is now considered to be his most complex masterwork.

He was influenced by Elvis, and over the years played or sang with countless musicians such as King Curtis, Little Richard, Wilson Pickett – the list is endless.  Sadly, he died in Sept. of 1970, at only 27 yrs. old.  On the last night of his life he was expected at a London Club to jam with Sly Stone.  One can’t help but wonder what “could have been” if his life wasn’t cut so short.

This book is chocked full details of Jimi’s short-term courtship with rock star fame.  It includes a selection of all his live appearances and a discography.  Hendrix, The Illustrated Story, closes nicely with what happened to his estate and the fight for control of his music after he passed on to Rock and Roll Heaven.

Best noted for his ultra-heavy Purple Haze, listening to it now will give you an instant 60’s flashback.  Crank it up and feel the riveting guitar playing that brought him and his fans to their knees.  Foxey Lady, one of my favorites, is seething with unmatched sexual energy.  Fire is a jumpy Hendrix classic – as he demands “Move over Rover, and let Jimi take over…”  — well, ok then!

I see shades of Hendrix when I think of Prince – the stellar guitar playing, indelible lyrics, the outrageous outfits, the commanding persona – the tie is there.  Current artists and up and coming artists could learn a lot from rock icons like Hendrix.  Hendrix may be long gone – but his music and legend still survive.

First published in 2017, don’t let this “must have” rock history book slip through your fingers.  Take a step back into the 60’s and enjoy the psychedelic trip!

NOTE:  All of Hendrix’s music is simply classic.  Many consider him to be one of the greatest (if not “the” greatest) guitarists of all time.  Need a Hendrix music fix?  These are my personal picks: