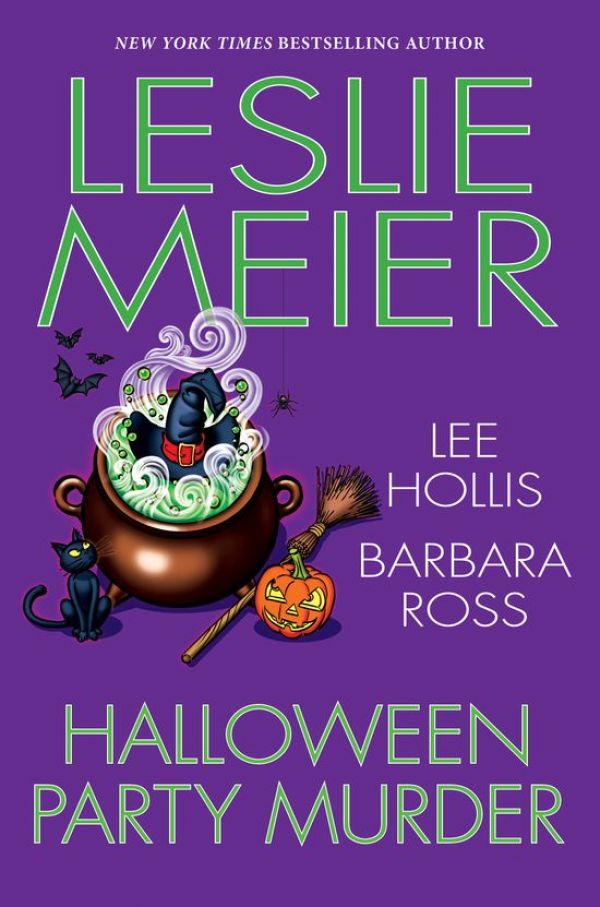 Each story stands solidly on it’s own. And if you’ve never had a chance to read some of the series by these 3 seasoned cozy authors, now is your chance to get a real feel for their writing styles, characters and settings.

FIRST UP: Leslie Meier dishes out her Halloween Party Murder with her “down-to-earth sensible mom” character Lucy Stone. Lucy’s kids are all grown up now, but she’s still a reporter for the local newspaper in the quaint town of Tinker’s Cove, Maine. Her hubby, Bill, is excited to be renovating Heather and Ty Moon’s spooky old Victorian style mansion – but NOT before the Moons throw a Halloween shindig that will not only be a fun-time for the locals, but a fundraiser for needy children.

The party is on and the mansion is filled with high-end scary special effects. Everyone is yakking away and having a great time munching on festive foods. But Lucy, unfortunately, discovers a body in one of the bathrooms – and it’s not one of the “special effects.” As an ace reporter, her investigative instincts immediately kick into overdrive.

You’ll find yourself chewing on all the suspects with possible motives as you weed through marital infidelity, a suspected abusive spouse and local residents who are hiding their darker sides. But when it comes to sniffing out a murder, wholesome Lucy Stone is like June Cleaver on steroids – and she’s not giving up until the murder is solved and the killer brought to justice.

NEXT UP: Lee Hollis gives us the Death Of A Halloween Party Monster from the Hayley Powell Mystery Series. Haley has just officially opened her own business, a new eatery in Bar Harbor, Maine. She’s kicking off her new establishment with a private Halloween party. Large parties seem to bring on chaos and drama, so she’s keeping it small – only 39 guests.

But even a small party can get out of hand. Everyone arrives dressed up in all types of laughable and creepy costumes. There are plenty of monsters – but only ONE monster is for real – and they have murder on their mind! You’ll enjoy lurking around a bevy of costumed suspects – including some vengeful teenagers.

Join the party from your most comfy armchair. Follow along with Hayley as she comes face-to-mask with a costumed killer.

Hayley Powell Mysteries are always brimming with quirky, amusing characters and food lover’s recipes – and this is no exception. Enjoy Death Of A Halloween Monster with a Boo Boozy Milkshake and Monster Meatball Sliders while you try to unmask the real killer!

LAST UP: Barbara Ross drops Scared Off in our Trick or Treat bag – and it’s truly a Halloween treat! Straight from her Maine Clambake Mystery Series, Ross lands her heroine, Julia Snowden, smack into the middle of a seasonal murder that’s a real fright!

Three young girls (one is Julia’s niece) have a sleepover. They innocently invite 3 more girlfriends. But it’s a social media world and someone puts out a media blast that there’s a huge party going on. Before the 3 girls can even utter the word “boo” – hordes of kids (all ages) are showing up with beer and booze and trashing the house! Uh oh – mom and dad are out at a neighbor’s Halloween party and are completely clueless!

When Julia’s niece is scared out of her mind by the out of control fiasco, she’s forced to call on “Aunt Julia” to come and rescue her and her two friends. Julia’s gets over there with lightning speed – and so do the local cops. Apparently the party crashers got scared stiff by the appearance of a ghost. Neighbors saw kids running from the house, screaming in utter terror. The neighbors had enough and called the police. Upon a thorough search of the premises, there was no ghost to be found. Instead they found a dead body (and another “uh oh” – there goes the neighborhood)!

I had a lot of fun with this one, too. It’s filled with seemingly innocent people who might not be so innocent. Barbara Ross always gives us solid characters that cleverly enhance her atmospheric cozies. Scared Off is a tasty Halloween morsel not to be overlooked this holiday season!

Time to get your “scare” on, and this is the perfect trilogy to get your Halloween heart started!