Dressed Up 4 Murder by J.C. Eaton 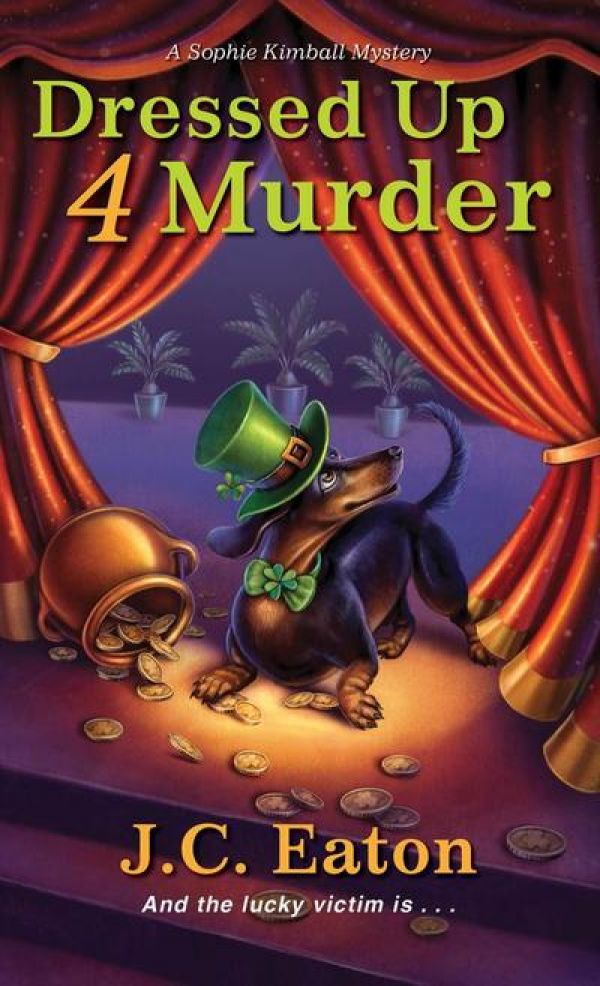 For anyone who enjoys a great cozy mystery with plenty of humor, this is another one that’s not to be missed!  And if you are a pet lover or enjoy the riotous extremes pet lovers can go to, this will surely tickle your fancy!

Sophie (Phee) Kimball works for the local detective agency as a bookkeeper.  Her boyfriend, Marshal, is also working there as a detective, alongside Nate, the head of the agency.  While Phee is the star character in the series, this book finds Phee hilariously overshadowed by her mother, Harriet, and her mother’s dog, Streetman.

Streetman is a Chiweenie, part Chihuahua and part Dachshund.  It’s October in Sun City West, Arizona, and all Harriet can think about is the Precious Pooches Holiday Extravaganza for dogs.  She’s registered her dog in all three of their contests (Halloween, Thanksgiving and Hanukkah/Christmas), plus a St. Patrick’s Day Doggie Contest in March!

It’s bad enough that poor Phee is dragged into the creation and design of all the dog’s costumes, but her mother would faint dead away if Phee missed any of the actual contests!   With all these poochie events for the next several months, it’s enough to max out a gal’s social calendar!

Even though Streetman’s expensive outfits sport more bling than Mr. T in his A-Team gold-chain heyday, he couldn’t care less.  All Streetman cares about is the neighbor’s backyard grill that’s covered with a tarp.  The snowbird neighbors have flown away – and Harriet suspects there’s some critter setting up housekeeping under their tarp.

Streetman has always had a nose for finding trouble – and when he finally breaks loose, he shimmies under the tarp.  When Phee and Harriet have to drag him back out, that’s where the trouble, once again, begins.  After all, it’s pretty darn hard “not” to notice there’s a body lying under the grill!

With the dog contest about to start and a dead body in her neighbor’s yard, Harriet is a nervous wreck.   She’s looking for answers – and if she can’t find them, she’s making sure her daughter, Phee, with the help of Marshal and Nate, get this murder wrapped up quickly.  She simply must have her wits about her for the dog contest, for the sake of Streetman – he has simply GOT to take first place!

The characters in this mystery are quite a fun-loving bunch.  Harriet’s gossipy book club friends add a 50’s style sitcom humor to the plot and Herb, is a seriously funny busybody neighbor.  You’ll be groaning along with Marshal and Nate, as Harriet tries to corral them into attending the contests.

You’ll be amused by all the pampered pooches and their antics.  You’ll be smiling at their gaudy outfits and booing at some of the downright snobby dog owners!  And I guarantee you’ll be rooting for Streetman to take first place in all the contests!

But here’s the thing – murder is running amuck in this lazy Arizona desert town.  As you laugh your way through the debacles at the doggie contests, you’ll be also be wondering if one of the dog owners or attendees could be a cold-blooded killer.

Lighthearted and witty, Dressed Up 4 Murder is a blend of mystery and doggie shenanigans that blend together perfectly for a fun read!