Designs on the Dead by Emilia Bernhard 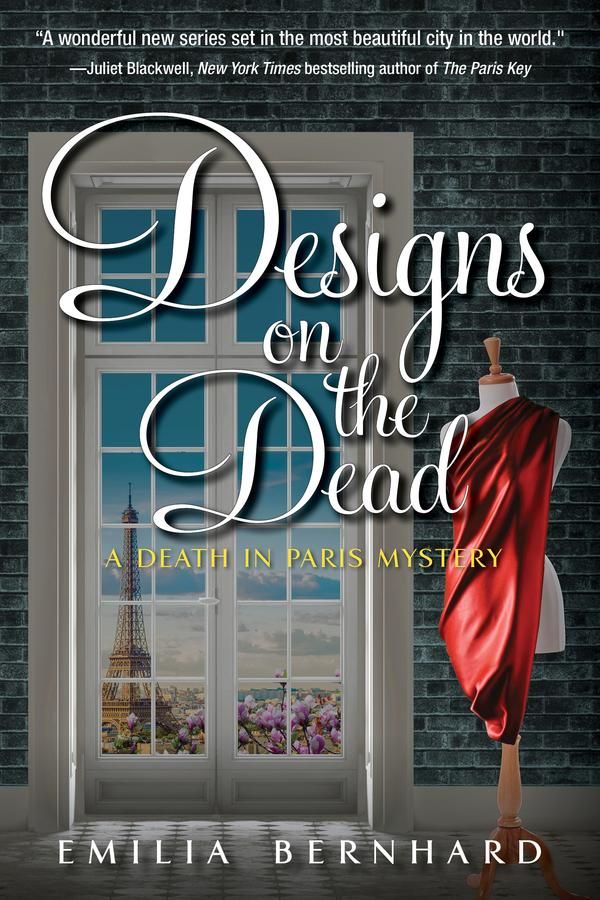 If you love a solid mystery and you’ve never been to Paris, now’s your chance to double down with Designs on the Dead, A Death In Paris Mystery by Emilia Bernhard.

The story opens with the death of prominent fashion designer, Roland Guipure. His late grandfather was a renowned and wealthy art dealer.

But when Roland was a young man in his twenties, he used the principal from the family trust to start a new family business – not art, like his grandfather, but fashion design. Everyone admired his flare for fashion. Everyone who could afford it, bought his clothing line, Sauveterre.

Roland’s twin sister, Antoinette, was the financial manager of their high-end fashion house. Working hand-in-hand with her brother, their success was enormous. Together they were known as the “wonder twins.”

But 15 years later at the height of his career, Roland started a slow 2-year downhill slide as he grew more and more dependent on drugs to stimulate his creativity. His good name started slipping away, along with his sales. His excessive drug use was no secret in the industry, so it was no surprise when Roland is found dead from an accidental drug overdose.

Our lead sleuth in this series is Rachael Lewis. She’s leading a good life, married to her husband Alan and living in Paris. Over the years Rachael and her long-time friend, Magda, have indulged in some amateur sleuthing and unexpectedly found themselves solving a few murders. As time moves on they decide to put their mystery-solving experiences to work – professionally. They are now in the midst of becoming full-fledged real detectives.

When Rachael reads the details of Roland’s death in the news, she’s horrified. He was her favorite designer and she’s followed his clothing designs for years. But as she reads on, she can’t help but notice things aren’t totally adding up. In fact, when she runs the scenario past Magda, they begin to think that the local police are glossing over the fact that Roland was, in reality, murdered.

Together they decide to take the matter into their own hands. Solving a murder that flew right past the Paris police force is sure to be a feather in their cap – a way to establish themselves and their new business as serious private investigators.

They soon discover that in the ranks of the rich and famous fashionista world, there’s more suspects and motives than hours in the day. Could Roland’s biographer be carrying a grudge for all the years he wasted trying to work with Roland? Could family members have an axe to grind? Did his death have something to do with a powerful licensing deal that was just about to be finalized? How about a competitor? Shady business dealings from the past? A jilted hanger-on lover? A bitter and slighted pattern cutter? An angry personal assistant? The list is endless.

The Paris setting is perfect for this well-plotted twisty whodunit. Don’t have the time or money to fly off to Paris on a lark? No worries! Pick up your copy of Designs on the Dead by Emilia Bernhard – you’ll be fully immersed in this first-class fashionable tale – no airline ticket needed.

A copy of this book was provided by Crooked Lane Books.