Death on the Shelf by Allison Brook 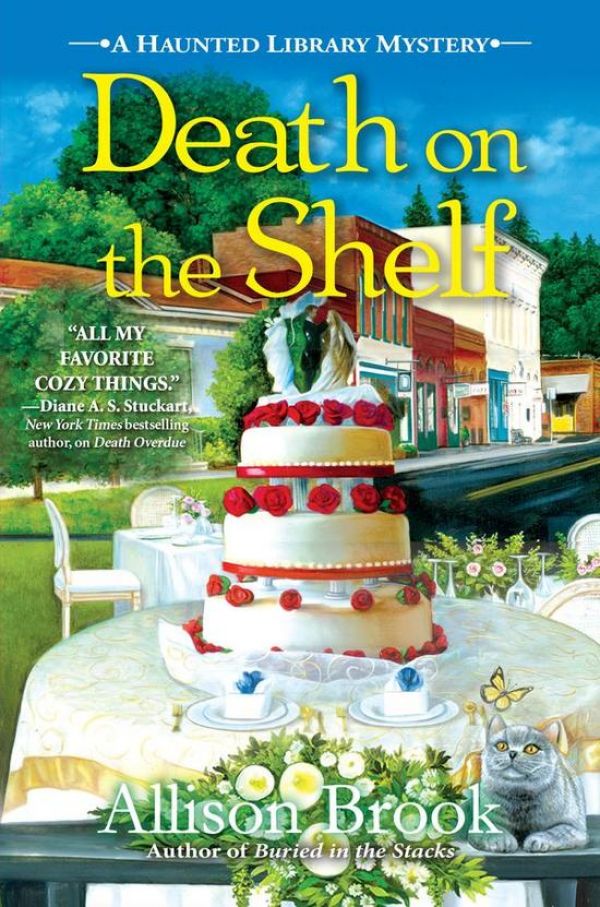 No need to worry about the gloomy, chilly winter weather outside with so many great cozies around! Stay inside and snuggle up in your favorite chair, grab a cup of hot chocolate or tea and a copy of Allison Brook’s latest release, Death on the Shelf, a Haunted Library Mystery.

In Clover Ridge, a small town in Connecticut, library program and events manager, Carrie Singleton has been helping her best friend, Angela, get ready for that “special” walk – i.e., down the matrimonial aisle.

The bridal shower is only a few days away, but trouble’s brewing faster than a Starbuck’s expresso!

The restaurant that was hosting the shower has had a serious fire and had to cancel – leaving Carrie and Angela at their wits end. But Angela’s cousin, Donna Harrington, has graciously volunteered her beautiful high-end home for the event.

When the day of the shower arrives, unfortunately, so does Angela’s trouble-making “thug” brother, Tommy. She spies Tommy in a tight conversation with Donna’s hubby, Aiden – and Angela knows in her heart, that he’s up to “no good.”

And so it begins: there’s a lot going on in this tale and it’s gonna keep you hooked! You’ve got cat fights, plenty of jealousy, flaring tempers and flying threats. And while the wedding ceremony finally goes off without a hitch, at the wedding reception, a prominent guest falls face down into the chocolate fountain, slides down to the floor and dies!

Of course, what looks like a possible “heart attack” turns out to be murder! Angela fears that one of her own family members may have committed the crime and she and other family members are leaning on Carrie to sniff out the killer before the local Chief of Police puts one of them under arrest.

But our Carrie is no stranger to amateur sleuthing – and she’s got some extra resources up her sleeve. Her boyfriend, Dylan,works for a private investigative agency, and then there’s Evelyn, who quietly pops in at the library, adding her spectral input.

Unfortunately, even a week after the murder, the Olympic size suspect pool keeps growing and the motive is nowhere in sight. Was the victim murdered due to something fishy going on in his office? A promised deal gone wrong? Or is it connected to the victim’s multiple affairs? Was this an act of a lovesick woman, a spiteful woman or a suspiciously quiet partner with an “uncaring” attitude? Could one of his loyal and trusted employees be holding a grudge? Or how about the victim’s wife –she’s inheriting some serious bucks along with an upper class house?

Then a fatal accident occurs and Carrie finds herself back at square one – with a killer, lurking in her shadow.

Allison Brook gives us solid framework when it comes to Death on the Shelf. With believable characters, an endearing romance and a very elusive murderer on the loose, you’ll want to add Death on the Shelf to your own bookshelf!

A copy of this book was provided by Crooked Lane Publishing.