Death of a Gigolo by Laura Levine 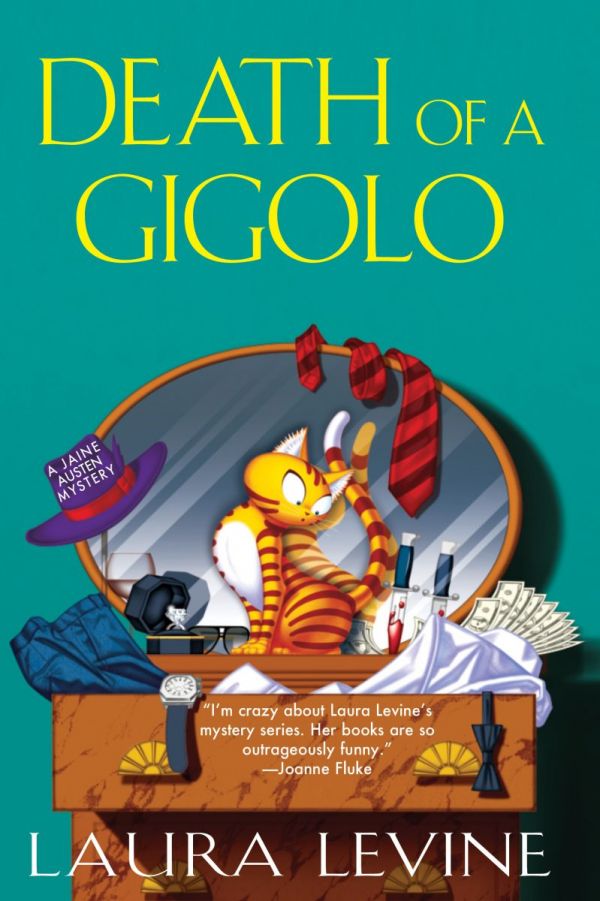 Funny Lady Laura Levine brings us yet another installment of her riotous Jaine Austen Mystery Series.  As usual, Ms. Levine NEVER disappoints!  Like all the others in her stellar series, each page is filled with wit, humor and sarcasm that only Laura Levine can provide.

You’d think after all her books that Levine would run out of steam with her storylines and continual laugh out loud humor – but, that’s simply not the case!

Death of a Gigolo finds free-lance writer, Jaine Austen, still struggling, still single, still trying to lose weight and still with her feisty feline, Prozac.  This time she finds herself with a new gig, ghostwriting a  steamy romance novel for wealthy sixty something heiress, Daisy Kincaid.  Daisy insists she work on the book at her plush villa – talk about perks!

She immediately bonds with Daisy’s assistant, Kate, and even better, is served fabulous gourmet meals by Raymond, Daisy’s personal chef!   She’s working in a setting akin to Lifestyles of the Rich and Famous and loving it! That is until one day, handsome, hunky Tommy LaSalle shows up at Daisy’s door.  Several years ago Daisy lost her good friend and traveling companion, Emma.  Turns out, Tommy was Emma’s nephew and has stopped by to thank Daisy for the many kindnesses she showed his aunt.

Daisy becomes totally enamored with Tommy and faster than you can say “boy toy,” he’s moved into her house and taking over her finances!

Her loyal staff is flabbergasted!  But this gigolo knows a good thing when he sees it.  Daisy’s smoothly running, happy household is now in total chaos.  The terrible Tommy is slashing salaries and threatening the staff.  He’s even antagonized her BFF and her gentleman suitor. Toss in Tommy’s dumped ex-girlfriend and you’ve got a war zone!

No surprise here when Tommy finally gets his just desserts – and we’re not talking Crème Brulee from Chef Raymond!  Jaine finds herself trying to figure out who did them all a favor. The suspect list is long.  Daisy’s staff, her friends and even Tommy’s former girlfriend, all had plenty of reasons to send terrible Tommy, with his leopard print thongs, back to the jungle of no return.

Fans of Levine will also be happy to know that Jaine’s feisty parents are still bantering back and forth with Jaine via e-mail.  Jaine’s dad is now sporting a mod Mohawk haircut spiked with a fishy smelling hair wax. Much to her mom’s dismay, as usual, he’s causing an uproar (and stenchfest) everywhere he goes!  They are a story within a story and I always look forward to their appearances in this series.

“DEATH OF A GIGOLO” – BRAND NEW RELEASE, COMING OUT IN SEPTEMBER!

Check out my interview posted earlier this year with Laura Levine under this “mystery” category.   You’ll learn all about her amazing past working with some of the funniest folks in the business!

THANKS FOR THE LAUGHS, LAURA – YOU NAILED IT (AGAIN)!