Death of a Bachelorette by Laura Levine 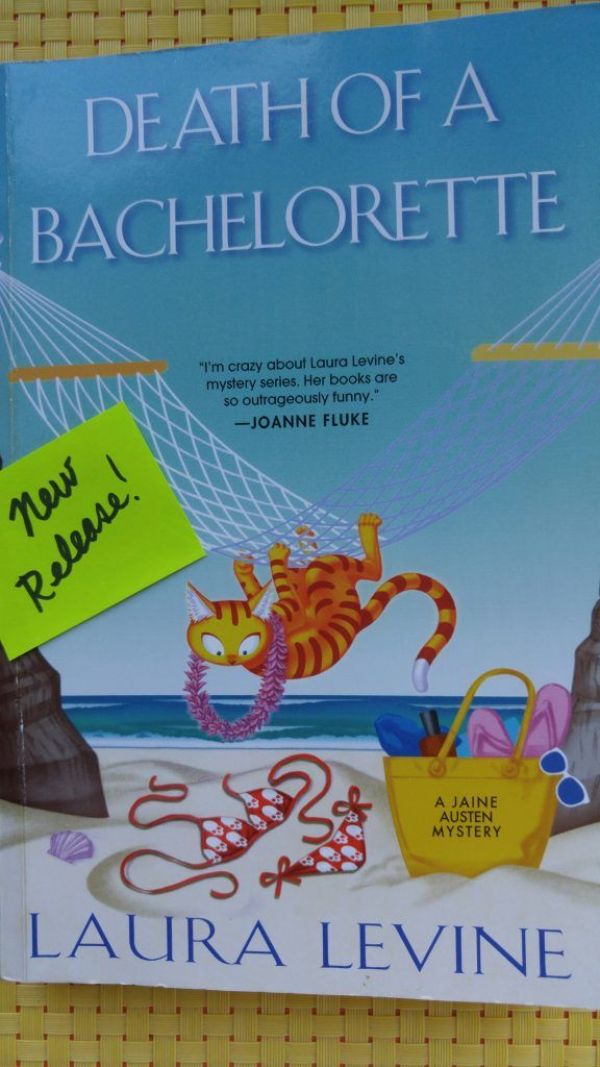 Summer 2018:  Looking for a terrific beach read during the hot and sweaty months of summer?  Then look no further — funny lady Laura Levine got you covered!  She can weave a cozy mystery filled with murder and madcap humor like no one else!

Freelance writer Jaine Austen thinks she’s landed the dream job of a lifetime writing for a reality TV show in the tropics.  Manny, the show’s hot shot producer, has even allowed her to bring along her extremely fiesty (yet lovable) cat, Prozac.  Together they head off to an island off the coast of Tahiti.

But her grand illusions of becoming a prominent TV writer (as opposed to writing her usual commercial ads and brochures for small businesses), come to a screeching halt, when she realizes the working conditions and accommodations on the island are less than desirable.  In fact, being trapped on an island with Godzilla vs. Megagodzilla might seem like a better option than this writing gig!   The staff and contestants are relegated to dumpy rooms, their food is literally leftover airline food and forget any type of air conditioning or a halfway decent stream of shower water.   And wouldn’t you know it – Manny’s accommodations include luxurious rooms complete with air conditioning, full kitchen and of course, someone to cater to him and fix his gourmet meals.

The contestants on Some Day My Prince Will Come are even cattier than Prozac on her worst day!  Backstabbing, fighting and blackmail are no strangers to this reality TV show gone terribly wrong.  To top it off, there’s a killer among the cast and crew, and Jaine is bound and determined to flush him or her out!

The laughs don’t stop coming as you weave your way through this delightful vacation read. You’ll sweat right along with Jaine as she tries to avoid the advances of the island chief, Konga, who is adamant about making her Wife Number 12.  He will stop at nothing to add her to his harem of wives who promise to wash is hair, floss his teeth (the few he has left), polish his harpoon and minister the needs of his pet pig, Ava Gardner!

You’ve also got cagey Prozac escaping from her room and creating utter chaos, especially when it comes to Manny’s fish tank and his personal cuisine, a thieving water bug living the life of luxury in Jaine’s room and running off with her pearl earring, and of course, her parents and neighbor, whose banter of e-mails to Jaine will have you rolling in the sand with laughter!

A web of a good tale with Jaine being the prey of the murderous spider and Prozac, the mischievous cat who, thankfully, just can’t help but intervene!  A perfect book for summertime reading – and who among us doesn’t want a little murder and laughter mixed into our pina coladas!