Death by Tiara by Laura Levine 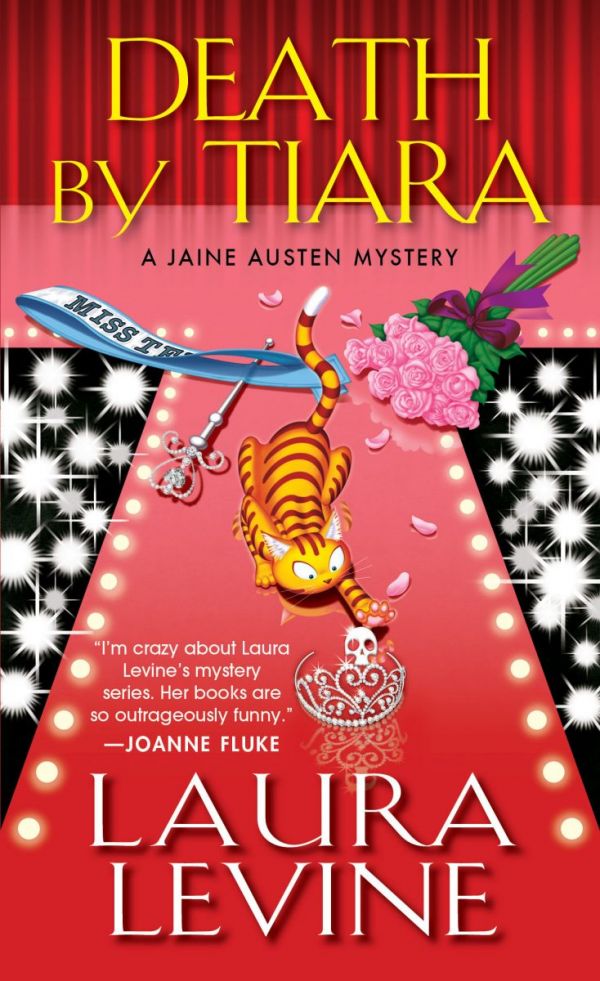 Whenever I’m in the mood for some madcap humor with a solid dash of murder, I always turn to funny lady, Laura Levine and her Jaine Austen Mystery series.

Digging deep into my private vault, I found her Death by Tiara.  Even though the book came out in 2015, it’s still available, and like ALL her books, it’s another hysterically funny cozy mystery.

Her heroine, Jaine Austen, is a single, looking for love, struggling freelance writer.  And if you’ve read any of Ms. Levine’s books in this cozy series, you know Jaine is also a part-time amateur detective, has a crazed feline named Prozac, a wacky neighbor, Lance, and double trouble, feisty parents.

In this book, there’s more focus on Lance and her parents…and frankly, I LOVE it!  They are all stories within themselves.  Lance is always on the lookout for Mr. Right, not just for Jaine, but also for himself!  His constant intervention into Jaine’s love life (or lack of), keeps a perpetual smile pasted on my face.

Jaine’s retired parents keep in touch with her through a series of back and forth e-mails.  Each parent is ratting out the other to their daughter, providing her with all the details of their uproariously funny escapades.  Their back and forth bantering and bickering are hysterical!  Her dad is always getting himself into all kinds of trouble and his poor wife constantly has to bail him out!

Ms. Levine’s steadfast characters (including Prozac) are so colorful, they could truly be in a book by themselves!  They add those extra dashes of madcap humor that just aren’t found in any other cozies that I’ve read.

This time we find Jaine working a teen queen beauty contest gig. Heather Van Sant is a pushy stage mom who enlists Jaine’s help to write song lyrics for her daughter.  She’s even going to pay Jaine’s way to stay at the pageant’s hotel.

Jaine’s on cloud nine.  She’ll be staying at the plush hotel and spa and getting paid to boot.  And won’t it be fun to watch all those talented young ladies with their charming moms in tow, compete in this classy teen queen contest? But as the saying goes, if it sounds too good to be true – well you know how “that” ends.

No one, especially Jaine, foresaw that the Teen Queen pageant would have more cat fights than a women’s WWF Smackdown match.  Low blows launched from one mom to another, physical assaults, missing designer gown, and cheating spouses – all ultimately leading to death by a silver tiara.

With more suspects than “wanna be” presidential candidates — and her client, Heather, being seriously considered as a murder suspect, Jaine steps up her game to try to find out what really went down at the teen queen pageant.  She’s determined to expose a ruthless killer, while Prozac, on the other hand, is determined to give a whole new meaning to the pageant’s “catwalk.”