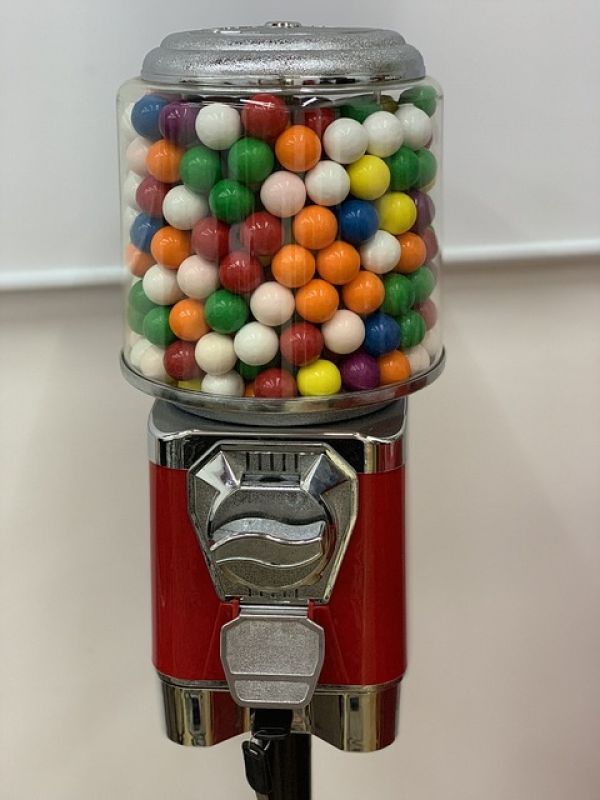 I’m feeling calm and groovy.  Life is good.  It’s the kind of morning where silly songs from decades past are popping into my head.

The 60’s ran amuck with bubblegum (and I don’t mean Bazooka) music!  Groups like the Ohio Express, and the Archies had their heyday with just plain, fun songs.  Their silliness filled our airwaves, firmly landing them on Billboard’s Top 100 list.

The most popular bubblegum group even packed their name with real fruit gum flavor. The 1910 Fruitgum Co. had five Billboard charted hits in the late 60’s, three of them making the Top 5.  Bringing back memories of an old-fashioned kid’s game, their simple Simon Says had us putting our hands in the air and shaking them about, while their Indian Giver pounded out a steady drumbeat that pointed the finger at the stingy lover who “took back the love you gave to me.”

In ’68 the Ohio Express had love in their tummy with their biggest hit: Yummy Yummy Yummy .  Their Chewy Chewy equated their girlfriends to a box of nicely wrapped candy, shooting Chewy Chewy into the Top 20.   They had other hits that charted in the Top 100, but it was their pure bubblegum songs that had the most success.

The Archies brought us a downright smooth, mellow and totally infectious tune – Sugar Sugar.  I still sway and snap my fingers whenever that song hits the airwaves. It cracked the Number 1 spot for several weeks in ’69.   Earlier this year on my way to adopting my rescue cat, the song Sugar Sugar came on the radio.  At the shelter, I picked up my squirming big ball of black fur and starting singing, “Oh sugar….oh honey, honey…you are my candy girl…”  My rescue cat’s new name is Sugar Sugar!

A true one-hit wonder, Kasenetz-Katz Singing Orchestral Circus brought us the quick witted jail break tale of Quick Joey Small (who went over the wall with a ball and chain behind him)!  The song reached its highest peak at Number 25 in ’68.  It’s my favorite bubblegum music story that many of you may not remember.  The video is done in Keystone Cops style.  It can be found on YouTube and is fun to watch.

Already touting Halloween merchandise, another one hit wonder in ’67, comes to mind.  From the song originally appearing in the 1939 film “The Wizard of Oz,” the Fifth Estate brought us Ding Dong the Witch is Dead.  Bobby “Boris” Pickett & the Crypt-Kickers, kicked Halloween into a whole new level with their dance The Monster Mash in ’62 and released it again in ’73.  The followup Monsters’ Holiday charted, but couldn’t beat out the smash Monster Mash which took a Number 1 spot in ’62.

From ‘61 through ‘77, it was hard not to notice Ray Stevens.  While not technically “bubblegum,” he did have some of the silliest and funniest songs out there during his long career.  Out of ten of his most popular hits, two managed to snag the Number 1 spot:  The happy, go lucky Everything is Beautiful and his hilarious The Streak. The Streak told the tale about some dude running around “nekkid as a jay bird.”  I heard it while riding in my car the other day.  Only my seatbelt kept me from rolling on the floor with laughter! Stevens spun this risqué ditty with his own unique style, conjuring up the image of his prim and proper wife as he yelled:  I said, “Don’t look Ethel!”  But it was too late.  She’d already been incensed.”

When those really “bad” days hit, and you feel like you’re losing your mind, you may succumb to those nice young men in their clean white coats — one of whom may be Napoleon XIV.  He might be coming to take you away to the funny farm, where life is beautiful all the time!

So take a stroll down Memory Lane with silly and laughable blasts from our past below.  Check them out on YouTube or download them onto your favorite listening devices.  They will surely put a smile on your face as you’re taking walks, doing housework, exercising — or if you just want some silly music to brighten your day.  Yes, you can “laugh” at this post on bubblegum music and silly songs – that’s the point!