An Old Hat Can Become A Bird’s New Nest 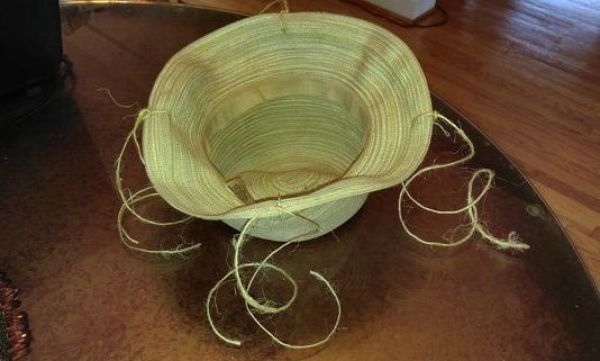 Spring is here and birds are anxiously scoping out places to build their nests.  Here’s an idea for not only recycling, but helping our feathered friends.

After our mother passed on, we were left with a lot of her clothing and other personal items. Among those items were two hats – one was an old round fur cap while the other was a fairly new bucket style sunhat that she wore while outside gardening.

I took the round fur-lined cap, turned it inside out, and punched 4 holes in it (spaced evenly apart approximately one inch from the edge). Then I pulled 4 strips of twine through the 4 holes.  I mounted the hat inside out (fur side “in”) and placed it in the densest part of a very thick, bushy tree where I knew birds tended to nest.  Last step was securing it by tying the twine to adjoining branches to keep it from blowing away in bad weather.

I then proceeded to convert our mother’s sunhat (shown above) the same way and mounted that in a tall thick bush.

My hope was that once the birds discovered these old hats secured by the twine and hidden from predators, they would use them as a foundation for their nests and fill them with twigs and leaves. A few weeks later with gloves on, I gently pulled away the branches (careful not to get too close) where I placed my mother’s hats. I was thrilled to see that both hats were quickly taken over.  Birds had actually built an entire wall of mud and leaves around the outside of the fur cap and even added a roof, while the sunhat housed a base of deep woven twigs.

At first my sister was horrified that I did this to our mom’s old hats – but then she realized that mom would understand. While we valued everything she left behind, some things we just had to let go of. Then we chuckled, because knowing our mom, she probably would laugh at my idea and then tell me it was a good one!

I smile whenever I think about mom’s hats hidden deep inside my bushy trees. I know that our mom’s spirit is out there too – around the birds and flowers, because that’s where she loved to be!