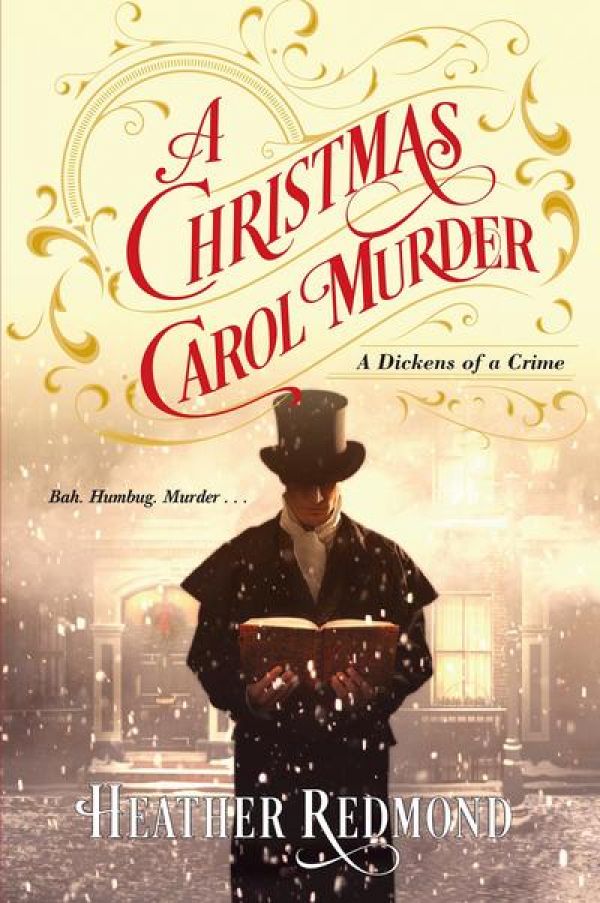 Fans of a good whodunit or Charles Dickens will relish this tale based on what Charles Dickens’ life could have been if he had innocently gotten involved in a holiday murder.  Some of the characters are loosely based on his famous A Christmas Carol, making it an even more delectable morsel on a mystery lover’s buffet!

The setting is December 1835 in London.  Charles is looking forward to the holidays with his fiancé, Kate.  But trouble ensues while he’s out with Kate and their friends to do some traditional Christmas caroling.  In the middle of a chorus of O’ Come All Ye Faithful, a second story window opens – and a man plunges to his death on the front steps.

But the story doesn’t even begin there.  It starts when, much to Dickens’ dismay, a frantic young woman holding a newborn comes to his door.  She has lost her sister in a horrific fire and is filled with woe.  Apparently the newborn was her sister’s baby.  She wastes no time in accusing Charles of being the father, shoving the baby into his arms and dashes off into the night!

Dickens is both horrified and mystified.  He knows he is definitely NOT the baby’s father.  And remember, in those days, it was totally unacceptable for a child to be born without the parents being “properly” married.  Even worse, orphaned and abandoned children wound up in workhouses, oftentimes meeting a terrible demise.

So now he’s on a quest – he’s got to find someone to take care of the baby while he tries to find the real father.  Meantime, it’s got to be “hushed up” for fear of public accusations that would lead to humility and public shame.  He certainly can’t tell, Kate, his fiancé – no – that simply isn’t an option.

But now in the midst of it all – there’s a dead body at their feet – and Charles and Kate are drawn into the mystery this poor man’s demise.

Mystery buffs will also love this “what if” tale.  It’s meticulously detailed for that era.  The characters and setting immediately transport you back in time.  You’ll get to know rich and misery Jacob Harley and his business partner, Emmanuel Screws.  And you’ll get insight into their counting house business (loans/mortgages/rents).   Oh how very different those times were!

You’ll also get to know their business staff as well as their house staff.  You’ll meet their friends, relatives and even a client or two.  Some of these folks are just what they seem – others have hidden agendas – others may even be murderers. And the mystery wouldn’t be complete without a ghostly apparition!

It’s a rude awakening when you realize how prim and proper things “had” to be back then – and you’ll be rooting all the way for Dickens to solve the murder while his life is being totally destroyed simply because he took in an orphaned baby.

There’s no “bah, humbug” here — only an intricately patterned holiday mystery that will force you to keep reading until you reach the end.  Add this to your winter reading list – if the hot chocolate doesn’t warm your heart, the ending of A Christmas Carol Murder will!

A complimentary copy of this book was provided by the publisher.  Kensington Publishing is a paid sponsor of Wonder Women Sixty.